The Almeda Fire Was Catastrophic, But There’s Hope In This Small Forest

The Almeda Fire last year followed a creekside forest running through several Southern Oregon towns, destroying thousands of homes along the way. But in this greenway, fire offers a new beginning.

The Bear Creek Greenway is sort of like the Central Park of Jackson County. The popular multi-use path is about 20 miles long, running from Ashland up to Central Point. For years it’s been immersed in a thicket of towering cottonwoods and blackberry thickets.

Nowadays a long stretch of the greenway is unrecognizable to locals. The Almeda Fire destroyed many of the trees or left them twisted and black. For weeks after the fire, the murky creek weaved through a dark expanse of deep gray ash.

Eight months later, the greenway has already become less bleak. A variety of plants are growing through the ashes, and birds flutter between the leftover trees.

Some of those birds are newcomers. They rely on these dead trees for nesting and foraging, DellaSala explains, as well as the new insects that have arrived to devour the dead bark.

“Some people look at this and they say, ‘It’ll never be the same. The birds are gone,’” DellaSala says. “Yeah, some birds are gone, but there are new birds that have come in that need this habitat. When we see a burned landscape, we see it as catastrophic, but it isn’t.”

He points down toward the creek as another example.

“You see this tree that's fallen into the stream?” he says. “That is really important habitat for fish and all kinds of aquatic species.”

That’s because logs create ripples and pools within the stream, which are prime feeding and spawning areas for fish.

The Almeda Fire was catastrophic. It destroyed more than 2,600 homes on Sept. 8, 2020, within a matter of hours. Now that wildfire season has returned to the Rogue Valley, many locals are on edge. Their wounds haven’t fully healed from last year’s losses.

DellaSala lives in Talent, one of the cities hit hardest by the fire. That morning he was writing an opinion piece for the local newspaper about how he was concerned that climate indicators pointed to a high potential for a major wildfire event in the region.

“Then my power went out,” DellaSala says. “I went outside and I saw a wall of black smoke descending on my community. I knew at that point that climate change arrived at my doorstep.”

The greenway was once overrun with invasive blackberry brambles and poison hemlock that were all but impossible to control. The fire cleared them out. Local government agencies are using this as an opportunity to restore native species.

The fire burned through 350 acres of the greenway that is owned by Jackson County, the state, and a handful of cities. Until now, they all worked independently of each other.

“Nobody really has a plan for managing the land,” says Steve Lambert, the county parks program manager. “It would be nice if we had a solid comprehensive kind of approach from all the different jurisdictions.”

Lambert is coordinating restoration efforts between the public agencies. He says county officials are preparing to make a request for contract proposals for a consultant to generate a comprehensive plan. The Board of Commissioners voted to allocate $300,000 to that project.

The county has already invested about $400,000 into restoration efforts since the fire, which included using a helicopter to dump seeds across the burn zone. The seed mixture included a handful of natives along with a large amount of barley seeds.

Barley grass now dominates much of the burn zone.It’s meant to prevent soil erosion, which often leads to flooding after a wildfire.

“All of that barley will lay over in the fall and provide good mulch and help retain moisture in the soil for the other native plants that are starting to come back,” Lambert says.

DellaSala says the barley was a good move. As an annual, it shouldn’t come back next year. And even though it looks like a fire hazard now, DellaSala says any fire that burns here will likely be a low-level brush fire. Fires become more deadly when they climb up into tree canopies. The canopies along this part of the greenway burned in last year’s fire.

But he does wish that more dead trees were left behind.

“I think they were overly cautious in terms of removing the trees that were along the pathway,” he says. “But then again, there's a lot of human activity in here, so I don't fault them too much for that.”

In the long run, DellaSala doesn’t see the fire as an end to this park’s beauty.

“This ecosystem is going to be just full of birds,” DellaSala says. “Small mammals, bats, all kinds of cavity-nesting species. And it's good for the fish. We just have to be patient and let nature do its thing.”

He adds it’s only a matter of time before the greenway becomes green again. 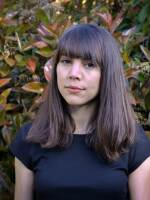