The Bureau of Reclamation announced the second-lowest irrigation supply ever to the Klamath Project along the Oregon-California border on Monday. The agency, tasked with delivering water to farms, indicated that it will likely be unable to fully meet Endangered Species Act requirements for ailing fish populations in the Klamath River Basin this spring and summer.

Though more than an inch and a half of fresh snow blanketed Klamath Falls Monday morning, it wasn’t enough to counteract a nearly three-year drought — one of the area’s worst in recorded history.

The region’s hydrology has improved slightly from last year. In 2021 farmers received zero irrigation water, dead juvenile salmon littered the banks of the Klamath River and a few extremist irrigators threatened to divert water by force. Still, no single party in the watershed is getting close to what they need.

“We wish we had better news today,” said Reclamation Mid-Pacific Regional Director Ernest Conant. “Obviously there are no winners in this critical year as all interests are suffering — fisheries, tribes, farmers and waterfowl alike. But given the current hydrology that we have to work with, we did the best job we could.”

Tributaries that feed into Upper Klamath Lake, a modified natural lake and the project’s principal source of stored water, are experiencing some of their lowest flows on record this year. Brian Person, special advisor to Reclamation’s Klamath Basin Area Office, said the total amount of water that entered the lake between October 1, 2021, and early this April is only slightly higher than the same period a year ago, which was the lowest on record.

That’s due to three years of record-low precipitation, poor snowpack and above-average evaporation driven by warming temperatures. Though the end of 2021 brought several powerful storms and even above-average snowpack, Person said conditions deteriorated “markedly” throughout the winter, when blue skies and above-average temperatures dominated the West Coast.

“We had a promising start to the water year,” Person said. “When 2022 came to us, so did dry conditions. So it was a teaser of sorts.”

According to Reclamation, irrigators in the Klamath Project will initially receive approximately 50,000 acre-feet of water from Upper Klamath Lake, a marginal improvement over last year’s initial allocation of 33,000 acre-feet, which was later reduced to an unprecedented zero following an exceptionally warm and dry spring. This year’s allocation is less than 15% of what the Klamath Project would receive during a typical irrigation season.

The surface of Upper Klamath Lake must not dip below 4,142 feet in elevation during the months of April and May to allow endangered C’waam and Koptu (Lost River and shortnose suckers) to reach spawning habitat along the lake’s shoreline. As of Monday, the lake sat half a foot below that requirement, and Reclamation does not expect that enough water will enter the lake in the spring to meet it. Additionally, the lake level will likely not meet minimum height requirements in mid-July. Those measurements are set in place to mitigate toxic algae blooms that contribute to mass die-offs of juvenile suckers in the summer. The agency does, however, believe it can keep the lake above its bare minimum elevation requirement of 4,138 feet with a few inches to spare.

C’waam and Koptu are integral food and cultural resources to the Klamath Tribes, who have depended on them since time immemorial but have not been able to harvest more than two a year since the 1980s. Klamath Tribal Councilman Clay Dumont said he and other tribal leaders are depressed and horrified that Reclamation appears to be throwing out the spring and mid-summer lake level targets. Doing so for the third year in a row, he said, allows them to make excuses in the future.

“It’s very bad news. It’s hard to comprehend the United States creating a situation where, for the third year in a row, our fish are not going to be allowed to spawn,” Dumont said. “The outrage is palpable, and legitimately so. What do you say when we’re being treated as unfairly as we are?”

Klamath Tribal Secretary Roberta Frost said it seemed apparent that Reclamation is not prioritizing suckers in water management decisions despite their precarious position as a species.

“Our fisheries, our C’waam and Koptu, are always an afterthought, while other needs seem like they’re more important,” Frost said. “Just because of the dire straits that they’re in, any blow to their habitat could be crucial. It could be the last year we’re seeing them.”

Efforts to save downriver salmon from disease

Salmon down the California side of the Klamath River may receive a lifeline later this week, when Reclamation plans to release a burst of water known as a “flushing flow” meant to scour spores and hosts of the Ceratonova shasta parasite present below Iron Gate Dam. High spore levels, high water temperatures and low flows last spring led to a significant juvenile fish kill that spanned the entire Lower Klamath River without a flushing flow to mitigate it.

Jim Simondet, Klamath Basin branch supervisor for NOAA Fisheries, said the flow event should begin around April 15 and release approximately 25,000 acre-feet of water down the river from Upper Klamath Lake — half of what constitutes a full flushing flow. Spore concentrations are entering the danger zone, and young salmon are expected to begin their migrations to the ocean soon.

“That is a good time to release that water, given the imminent risk of C. shasta,” Simondet said.

The Yurok Tribe, whose reservation encompasses the lower 44 miles of the Klamath River’s course, appreciated the reintroduction of a flushing flow that agencies did not implement last year. Tribal members throughout the Lower Klamath Basin and its tributaries have depended on salmon and other anadromous fish species in the river since time immemorial for physical and cultural sustenance, and their populations are declining due to the presence of dams, irrigation diversions to other watersheds and other landscape modifications.

“Although we are gratified that the river is afforded minimal protections under this plan, it is no time for celebration,” said Yurok Vice Chairman Frankie Myers. “Salmon runs will continue to suffer under these conditions, and as climate change intensifies, such protections will become increasingly important.”

The Klamath Water Users Association, which represents agricultural producers served by the Klamath Project, bemoaned the agency’s 2022 water allocation. They argued that more water should be given to the project’s roughly 1,200 farmers and ranchers amid rising global food prices and insecurity, and that allocating it to fish hasn’t improved their populations for more than 20 years. Representatives Cliff Bentz (R-Ore.) and Doug LaMalfa (R-Calif.) penned a joint letter last week to President Joe Biden citing these reasons and urging the release of 162,000 acre-feet to project irrigators.

“We’re ready to get to work. On a single acre, we can produce over 50,000 pounds of potatoes, or 6,000 pounds of wheat. This year, most of that land will not produce any food because the government is denying water for irrigation. We’ll just be trying to keep the weeds and dust under control,” said KWUA President Ben DuVal, who farms on Klamath Project land in Tulelake. “If we farmers failed as badly as the federal agency biologists who are controlling water policy, our bankers would have foreclosed on us 20 years ago.”

Reclamation also announced $20 million in drought relief on Monday for irrigators who will leave their fields fallow this summer. Another $5 million in assistance is being allocated to projects in the basin led by tribes. But farmers have indicated that they’d rather have water than money.

A majority of producers in the Klamath Irrigation District, one of around a dozen entities in the Klamath Project that contract with Reclamation to deliver water, recently indicated through a poll that they would be willing to forego federal drought relief if the district were to break with Reclamation’s operations plan and divert more water than it’s allocated this year. Though KID maintains that such action would still technically be consistent with their contracts with the federal government, the legality of the situation remains muddled and unresolved by the courts.

“We’re hoping that irrigators cooperate with us and adaptively manage the limited supply that we have,” Conant said.

Though KID has not announced any plans to actually divert additional water outside the realm of Reclamation’s plan, the agency noted that the district’s decision to begin releasing water into the project’s main artery, known as the A Canal, in March was inconsistent with the agency’s timing directives. However, Person said the action won’t jeopardize drought funding for KID patrons because a slow priming of the A Canal is necessary to preserve the water delivery channel’s structural integrity and ensure the safety of the surrounding community in Klamath Falls.

“That part of the operation, they have absolutely been in alignment with Reclamation’s guidance,” Person said. “The timing of it, not so much.”

Lower Klamath and Tule Lake National Wildlife Refuges, two of the nation’s first areas set aside for the protection of waterfowl, once supported as much as 80% of migrating birds on the Pacific Flyway. But because they depend on leftover irrigation water from the Klamath Project and sit at the bottom of the water rights pecking order in the basin, their wetlands have been progressively drying up for two decades. This year, Reclamation has made no plan to deliver water specifically to either refuge, and Tule Lake is likely to go completely dry for the first time in potentially millions of years.

Jeff McCreary, director of operations for Ducks Unlimited’s Western Region, said the situation on the refuges is critical.

“These refuges are essential to support the Pacific Flyway, which is in dire straits because of this widespread Western drought,” he said. “Every drop of water is critical, and we hope a few can be used to support waterfowl this year.”

While farmers urged an overhaul of water policy in the basin, tribes pointed to the need for landscape-scale restoration actions that could improve habitat and water quality for the Klamath’s species, which may free up water for agriculture.

“The Upper and Lower Klamath Basin once functioned as an integrated system that provided abundant salmon, suckers and waterfowl with minimal intervention. The fact that these systems now appear to be in conflict with each other is a direct result of…ecological collapse,” Myers said. “It is our duty to help bring this system back into balance, and we will never stop working toward that goal.” 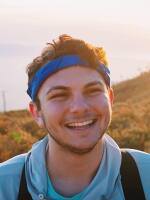 Alex Schwartz
Alex Schwartz is a freelance reporter based in Klamath Falls. He used to cover the Klamath Basin water crisis and its potential solutions as a newspaper reporter for the Herald and News.
See stories by Alex Schwartz