Health and Medicine
Oppressed By Wildfire
Jefferson Public Radio spent months speaking to families in Northern California about how wildfires impact them. We found that wildfires leave the most long-lasting impacts on marginalized populations — including people of Latino and Native American descent, people who are homeless, and people with disabilities. The key issue, it seems, is that wildfire response and preparation systems weren’t designed with these communities in mind. This four-part radio series was produced in partnership with the USC Annenberg Center for Health Journalism’s 2019 California Fellowship.

Oppressed By Wildfire: Disabilities Challenge Some Victims' Evacuations And Their Recovery

Some people say they only had minutes to prepare before they had to flee their homes during the Carr Fire in Shasta County last year. Such short notice was extra challenging for seniors and people with disabilities.

Ben Lingle of Redding is 29 years old and has a number of developmental disabilities that make him dependent on his parents. His mother, Sandy Lingle, recalls the night the fire hit.

“We stayed in our courtyard all night. Nobody went to sleep,” Sandy said. “The next morning we got a notification saying we should evacuate, but it wasn’t our street, so we didn’t. All of a sudden we look up and we could see the flames and we could see the helicopters and Ben lost it.”

Ben was in the car before his parents and his brother were ready. He wanted out.

“I grabbed our papers, his medicine, the dogs,” Sandy said. “We all had ‘go bags’ ready. But I didn't check the bags. Then we get to where we’re going and I look in the bags.”

Ben had packed what was important to him: “He only had stuffed animals in his bag,” Sandy said. “No clothes. He had to wear his brother’s clothes for a week.”

A year later and his parents say Ben has changed. He’s grown up in a lot of ways: he’s working at a car wash, making friends at work, and improving his bowling skills. Ben has been bowling with his family since he was four years old. He always stuck with Special Olympics teams; that is, until this year, when he joined an adult team for the first time.

“To this day, if Benjamin hears a fire truck, if he sees smoke, he calls me,” Sandy said. “It’s still raw to us.”

Ben’s father, Jacob Lingle, works with the Shasta County Opportunity Center, a job training program for people with disabilities. During the Carr Fire, the center scrambled to ensure its clients were heeding evacuation notices and that they had proper transportation and medications.

Program manager Stephen Mitchell says many clients experienced the same heightened anxiety that Ben did during the fire.

“Change is hard for everybody — and then you add to that the anxiety level of knowing something bad is going on — that’s compounded for people with developmental disabilities,” Mitchell said. “They don’t understand change.”

Mitchell said the Carr Fire descended on some homes so rapidly that people never got alerts on their phones; instead, they got firefighters banging on their doors. Such short notice limited their ability to get out of their homes safely, especially if they had physical or developmental disabilities.

A year earlier, the Northern California town of Santa Rosa was also engulfed by a sudden catastrophic wildfire. Oscar Chavez of Sonoma County Department of Human Services said most of the fatalities from that fire were seniors and people with disabilities.

“Our senior population and our disabled population, they were the most vulnerable of the 24 deaths we experienced,” Chavez said. “People who could not hear the police or who didn't have their hearing aids in, or people whose power went out and they weren’t able to open their garage door.”

About three-quarters of people who died during the 2017 wine country fires were 60 years or older. Then Northern California was hit with the Camp Fire in Paradise the following year, which killed 81 people; 85 percent of them were seniors.

“These are very important lessons we need to think about,” Chavez said. “As our population is aging, not only in Sonoma County but across the state, and with climate change impacting us in greater frequency, we really have to have a much larger coordinated strategy to address the needs of our vulnerable and elderly population.”

And those needs extend beyond immediate safety responses. Sarah Mickelson of the National Low Income Housing Coalition says there are also long-term economic effects that wildfires leave on people who rely on fixed incomes.

“Many of the lowest income households — so seniors, people with disabilities, people living in mobile home parks — they often don't have the resources to get back on their feet, but they’re often located in areas with the greatest risk for disasters,” Mickelson said.

This is especially true of rural areas in heavily forested Northern California counties where economies are already struggling.

Senior and disability advocates like the Opportunity Center in Redding say that’s why forming relationships with neighbors is so important. They’re encouraging clients to reach out to people who live around them; people who they can trust and who can become educated about their needs. That way, the community could pull together to help the people who need it most during the next major disaster. 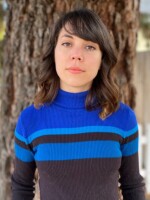