Though tributaries like Horse Creek are far out of the spotlight, they are an integral part of the whole Klamath River ecosystem. Without these, it’s unlikely that dam removal alone will help coho and Chinook fully recover.

It’s not every day that you see a full-sized conifer, stripped of its limbs but with base and roots intact, fall from the sky.

But over the course of two days in 2020, pilots from Columbia Helicopters shuttled over 120 such trees to the upper reaches of Horse Creek and let them crash to the woods below.

Horse Creek is a tributary that feeds into the Klamath River about 150 miles from the Pacific Ocean. The log moving was about as exciting as creek restoration gets. As the helicopter descended, a member of the ground crew stood in the creek flashing a strobe, stepping out of the way just before prop wash set off a cyclone of dead leaves and bent alder trees backwards. As soon as the chopper dropped its heavy load, it was off to fetch another log.

“You had about a minute before the next one arrived,” recalls Toz Soto, fisheries biologist for the Karuk Tribe. “But at $8,000 to $10,000 an hour, every second counts.”

The project, a collaboration between the Mid Klamath Watershed Council, Karuk Tribe, and U.S. Forest Service, is one of many designed to make life better for coho salmon in the middle stretch of the Klamath River. Using helicopters—a first for these groups—allowed them to get “big wood” in places inaccessible by roads. The giant logs were salvaged from forests that burned in the nearby 2016 Gap Fire. They will slow the creek down and help retain water in the upper reaches of the forest.

As dramatic as the log delivery was, Mitzi Wickman, fisheries project director for the Mid Klamath Watershed Council, was just as excited to see the instant results.

“This was the first project where I was like, you can raise the creek bed instantly,” says Wickman, who orchestrated the action. MKWC (pronounced “Mik-Wik”), based in Orleans, partners with many local and regional organizations on ecosystem restoration in forests and streams in the Mid Klamath region, which stretches from the tiny community of Weitchpec east to Iron Gate dam.

Like so many Klamath River tributaries, Horse Creek has been altered by decades of logging, mining, and road building. Humans have straightened and moved creeks to accommodate agriculture, and in some cases, cleared them of wood and debris with the intention of reducing damage from flood-borne debris.

In addition to habitat loss and degradation, four hydroelectric dams on the main stem of the Klamath River block both coho and Chinook salmon from the upper basin. These dams are slated to be removed starting in 2023 in what some are deeming the largest ever river restoration project.

Though these tributaries like Horse Creek are far out of the spotlight, they are an integral part of the river ecosystem. “Messy” creeks that are full of wood make for the best fish habitat—sandy shallow spots for adult salmon to spawn; and pockets of cold, still water where young fish can safely develop. Without these, it’s unlikely that dam removal alone will help coho and Chinook fully recover.

For this reason, groups like MKWC and the Karuk Tribe, along with federal and state agencies, have completed dozens of projects on Klamath River tributaries, slowly but surely helping straight, clean, efficient waterways like Horse Creek become a little messier and more dynamic.

The “Mid Klamath” is home to a variety of fish species, including federally threatened coho salmon. While Chinook swim seaward within three months of hatching, young coho hang out in freshwater streams for a year or more. They need good habitat through the seasons, and they like their water cold and slow.

Twelve years ago, MKWC and the Karuk Tribe dug a pond on private land next to Seiad Creek, a tributary just downriver of Horse Creek. Their aim was to create a refuge from swift winter flows. The new pond was completed that summer, and it quickly filled with cold groundwater that fish like salmon prefer.

“Within days, maybe even hours, coho moved in,” says Soto. The same thing happened at two other ponds.

Around that same time, the Karuk and Yurok Tribes started tracking tagged coho. They learned that if you build a pond, coho will come, often from quite far away. Since then, the partners have built at least 30 ponds, including a series of three adjacent to Horse Creek.

Tracking tagged coho has also informed their restoration strategy for spawning adult fish. While adults may return to the place where they were born, as most salmon do, they may also swim up an entirely different creek system and spawn there.

On one half-mile stretch of Horse Creek, not far from the ponds, the partners have constructed a dozen man-made “wood jams”: crisscross collections of logs set at angles to the creek channel. The jams create little pockets of slower, deeper water and catch gravel, which coho need to dig their nests, called redds.

Horse Creek sees the highest density of spawning coho salmon in the entire Klamath Basin. “Of the 200 redds in Horse Creek, 60 to 80 were in this half-mile stretch where the jams are,” says Wickman.

MKWC and the Karuk Tribe have an even bigger, more ambitious project planned for Horse Creek that will incorporate several different restoration techniques. But, doing fish restoration in the heart of the State of Jefferson requires patience.

To get to Horse Creek from Interstate 5, you must drive through the Klamath River canyon along Highway 96. The further west you go, the steeper and more rugged the country feels. Ten miles in, you hit the McKinney Fire burn scar: entire hillsides burned bare save for acres of charred matchsticks; brick chimneys rising out of the ashes of destroyed homesites. The fire sparked off during a bone-dry day in late July last summer and quickly blew up to over 50,000 acres. Just days afterward, torrential rains sent mud and debris sliding into the river, suffocating thousands of salmon, suckers, and trout. In all, the fire burned over 60,000 acres, killed at least four people, and devastated the tiny community of Klamath River.

Services are few along this remote stretch, and the people who do live here all know each other. Residences cluster along the river and lower reaches of tributaries.

Coho are “valley fish,”—they prefer the slower stretches of streams that flow through low, flat valleys—but this is also where people tend to live. Often, the best opportunities to restore habitat are on private land, but some residents equate salmon—especially a threatened species like coho—with restrictions and regulation. “There’s a lot of mistrust of the federal government,” explains Soto. “They don’t want people telling them what to do.”

Often, one restoration project on private land helps open the door to another. Most of the heavy equipment operators are community residents, says Charles Wickman, fisheries program co-director for MKWC and Mitzi’s husband. “They’ve turned out to be the best ambassadors for the work.”

Permitting is another obstacle. Recognizing the need to increase the pace and scale of restoration, California’s water boards have taken several actions to “cut through the green tape,” says Jacob Shannon, restoration coordination specialist for California’s North Coast Regional Water Quality Control Board.

Any project that removes or adds material to a waterway, such as excavating a pond on or placing logs in a stream, must obtain certification under the federal Clean Water Act. The application is complicated and expensive.

The ponds, helicopter and wood jam projects on Horse Creek all took advantage of a new permitting pathway for small restoration projects that was developed in 2015. The application is cheaper and easier, and there’s no public notice period. In total, the streamlined process saves “between thousands and tens of thousands” of dollars, says Shannon.

The agency recently developed a “big sister” to the small habitat permit which will be used for larger projects. This, combined with an infusion of funding, should trigger a wave of restoration projects in the Klamath Basin. The Bipartisan Infrastructure Law allots nearly $16 million per year for five years for restoration projects across the basin. More recently, Secretary of the Interior Deb Haaland announced $5.8 million in funding for four tribal restoration projects on the Klamath and its tributaries.

Looking ahead to dam removal

Horse Creek is just one tiny tributary on the Klamath. MKWC and the Karuk Tribe have collaborated on projects on other creeks and, more recently, on the main stem of the Klamath River. For one, they took advantage of a deep, cold pond left over from the heyday of dredge mining for gold, which peaked in the 1930s.

“We’re constantly trying to think of ways to provide cold water to fish, especially close to the main river, because it gets very hot in summer,” says Mitzi Wickman. They excavated a channel to connect the pond to the river and built wood structures to direct flow toward the pond. Because it is less than five miles downstream from the Shasta River, the pond could serve as a refuge for coho and Chinook salmon from that tributary, which warms quickly in spring.

The partners are also thinking ahead to a future where dams on the Klamath River will no longer block fish from the upper parts of the Klamath Basin.

The removal of the dams has been touted as a massive restoration project, but it isn’t enough to simply remove the structures. Creating and enhancing good habitat above and below the dam footprints is critical.

“It was important to us to get this project done before the dams are removed,” says Wickman. “We hope to capture some of the reservoir sediment on the barren river bar, where it can provide a growing medium for riparian plants, and we want to provide fish a place of refuge from turbid water.”

The more options fish have, the better their chances for full recovery.

Once the dams are gone, the coho tracking project will expand to include the entire watershed, says Soto. A new basin-wide plan guiding restoration and monitoring is just about completed, too, and will help set priorities for where and how the money will be spent.

“Part of the mission of dam removal is to make the basin whole so fish can utilize the entire basin,” says Soto. “It’s not just about fish passage. It’s a lot more complex.” 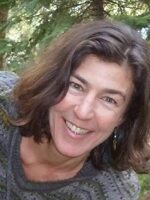 Juliet Grable
Juliet Grable is a writer based in Southern Oregon and a regular contributor to JPR News. She writes about wild places and wild creatures, rural communities, and the built environment.
See stories by Juliet Grable
Your support is vital to JPR's ability to cover regional issues, and bring you fact-based news.
Contribute Now