The Rebirth of Ashland's 'Say Their Names' Memorial

Community members in Ashland have created a new version of the art installation to replace the one stolen last weekend.

There's a new iteration of the "Say Their Names" memorial exhibit that was recently stolen in the middle of the night from a city park. The new display is apparently an ad hoc creation by people determined to keep the original message alive.

The new installation is similar to the original. It contains t-shirts bearing the names of people of color who died in encounters with police. In addition to the t-shirts, there are new banners and placards with slogans in support of Black Lives Matter.

JoAnne Feinberg is the creator of the original exhibit.

"It really is a community effort," she says. "As early as Saturday morning when people realized the memorial was gone, they started to put things up again and they wanted to make sure that fence was filled with 'Black Lives Matter' and 'Say Their Names'. I go everyday to see what creativity has taken place. But one of my teammates had said that Saturday turned from tears into lots of joy and goodwill. So it’s really, really turned around. I think it’s better than before."

The City of Ashland has issued no permits or endorsements for either version of the "Say Their Names" memorial. 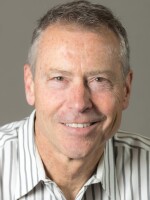