Today, while many other American communities are observing Columbus Day, Eugene is joining several other Pacific Northwest cities in recognizing the second Monday of October as “Indigenous Peoples Day”.  KLCC’s Brian Bull reports.

The observance follows a Eugene City Council resolution last March.  It echoes a proposal by a Native American delegation to the UN nearly 40 years ago.

Brenda Brainard is a member of the Coos, Lower Umpqua, and Siuslaw Indian nations, and heads the 4-J School District's Natives Program.  She says for decades, American communities have observed "Columbus Day"...which left Indian kids feeling out of place and generalized.

"Y'know, it's '1492, Columbus sailed the ocean blue.." to discover us.  We teach that Indians were here, but we don't teach who native people really are," says Brainard.  "They're all just kinda lumped together in this big tipi-living, kinda buffalo-hunting, group."

Brainard hopes people learn about the diversity of native people, as well as their history.

Caitlin Estes, a spokeswoman for the Eugene City Council, says the resolution had strong support.

"The West Coast has many people who are Native Americans and it seemed like an appropriate change," she tells KLCC.  "And many other cities across the country have made the change. 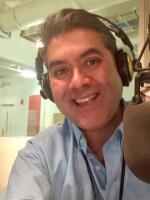 Brian Bull
Brian Bull joined the KLCC News Team in June 2016. He is a 20-year reporter who has worked at NPR, South Dakota Public Broadcasting, Wisconsin Public Radio, and ideastream in Cleveland. His reporting has netted dozens of accolades, including three Edward R. Murrow Awards and the Ohio Associated Press' Best Reporter Award in 2012.
See stories by Brian Bull