As It Was: Newspaper Offers Glimpse of Early South Coast Life

On June 16, 1883, the Del Norte Record newspaper published a column titled “News of the Week.” It offers a glimpse into early-day life on the Southern Oregon Coast.

Orvil Rice cut his foot badly in logging camp. — A Chinaman was punched in the snoot at the same camp. The puncher fired and a bottle of St. Jacob’s oil ordered for the victim.—The road to Smith River is good now, but the mill has shut down.—The Elk river mill lost its auger in the artesian well. —The Odd Fellows are talking about a new cemetery.— MacNamara says a band of cattle are coming over the mountain next week.—The Judge was seen riding Jimmy’s 4-foot mule.—Wind howling from the north. –Strawberries are scarce.—The drug store will soon move to more commodious quarters on Front street.—Horace Gasquet offered the lowest bid for building the South Fork bridge.—Mrs. Steele opened a ladies store on Second street. —Bay Hotel barber shop closed, barber gone to Jacksonville.—The recently built Second Street saloon will be the finest in the county.—James Pomeroy caught a gopher a foot long, but nobody actually saw it.

As It Was Del Norte Record 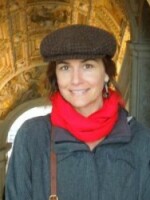 Laurell Reynolds
Laurell has a background in visual arts from studies at Southern Oregon University and Washburn University, and graduated with a self-designed BA in Fiber Arts from the College of Santa Fe in 2003. She was a staff member and operations engineer at Santa Fe’s public radio station KSFR, host and producer of 'Folk Remedy' from 2008 to 2011, as well as co-host of the political talk show ‘Living On the Edge’ and cooking show ‘Mouth Of Wonder’. In recent years she’s DJ’d at Oregon stations KLCC and KSOW in the Eugene area.
See stories by Laurell Reynolds