A forest fire threatened the city of Ashland, Ore., and its historic Lithia Park on Aug. 8, 1959.  Steve Hess, son of Ashland’s Postmaster Parker Hess, was a 17-year-old junior at Ashland High.

The blaze started near Jackson Hot Springs and advanced to hills above town.  Hess said he and his best friend, Jim Susee, went to a play at the Oregon Shakespeare Festival that night.

“My most vivid memory . . . was when Bill Patton … (the theater’s general manager) … came out on the stage and announced that he would let people know in time if the fire came into Lithia Park so that they could get to their cars and move them.

“Every so often the fire would flare up and light up the stage and audience . . .At the end the players were given a big ovation and we left to walk home.  Quite an experience . . .”

Tags
As It Was Oregon Shakespeare Festivalfire 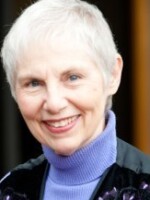 Shirley Patton
Shirley Patton’s personal history in the State of Jefferson began in 1958 when she joined the acting company of the Oregon Shakespeare Festival. She appreciated her 30 years in the company. She also performed with many of the smaller area theatres and is currently with Camelot. A founding member of the Extended Circle in 1990, Shirley joined a dedicated group of entertainers who present variety shows every Tuesday morning in care facilities and retirement centers throughout the Rogue Valley.
See stories by Shirley Patton