The state marks his second success in rebuilding the “blue wall” around the Great Lakes. Wisconsin was called for Biden earlier Wednesday.

President Trump’s campaign has contested the vote-count process in Michigan and some other states.

In one of the biggest upsets of the 2016 election, Trump won Michigan by just under 11,000 votes. The Great Lakes State had not voted for a Republican in a presidential election since 1988.

The Democratic ticket spent significant time in Michigan, including during the last stretch of the race, signaling the state’s key role in Biden’s potential path to victory. On Saturday, Biden joined his former running mate, Barack Obama, for the first time this campaign for drive-in rallies in Detroit and Flint. On Tuesday, vice presidential nominee Kamala Harris made a final campaign stop in Detroit.

Trump, too, staked a lot on Michigan. He campaigned in the state throughout the race, including late Monday night, when he held a big rally in Grand Rapids to close out the 2020 campaign. Grand Rapids is where Trump finished his 2016 campaign, and that late-night rally four years ago has taken on somewhat of a central role in Trump’s telling of his path to winning Michigan — and the presidency.

Trump had been looking to replicate the energy of that first campaign in Michigan, but those efforts have fallen short. 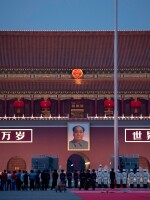 Sam Gringlas
Sam Gringlas is a producer for NPR's All Things Considered and is helping cover the 2020 election for the Washington Desk. He's produced and reported with NPR from all over the country, as well as China and the U.S.-Mexico border. He started as an intern at All Things Considered after graduating with a public policy degree from the University of Michigan, where he was news editor at T he Michigan Daily. He's a native Michigander.