My mom grew up in inner city Detroit, attending grade school in the 1960s with Stevie Wonder. She shared social studies, science and an arts elective called “Auditorium” with Mr. Wonder. In this class, students were required to create mock radio shows and Stevie’s contribution was usually playing his harmonica.

If only I could have been a fly on the wall. Needless to say, Motown was my mom’s music. When I was growing up, soul was a staple in my house. It was the music my Dad would blast on our stereo to lift the mood; it was my Mom’s music of choice to inspire my brother and I to do household chores. And now as an adult, I’m treated to doses of nostalgia whenever I turn the radio on because soul is playing everywhere again.

I recently had the pleasure of meeting neo-soul singer Allen Stone at the JPR studios. In a Live Session interview, host Eric Teel asked Stone why he was drawn to soul. He chuckled and remarked that it was like asking someone why they liked chocolate or vanilla. It just feels good when you hear it. It is the number one genre filling my personal playlists and a hearty stack of CD copies of retro and neo-soul records occupies the console and glove compartment of my car. I’m such a soul junkie that I sing in a soul cover band of my own creation, simply named the Danielle Kelly Soul Project.

To my delight, soul has come full circle and is making a resurgence among contemporary recording artists. Each month we have the pleasure of featuring a brand new batch of soul artists on Open Air. Amy Winehouse may have been one of the biggest names at the start of this resurgence, but also think Adele, Aloe Blaac, Sharon Jones and the Dap Kings, Leon Bridges, Curtis Salgado, Charles Bradley, James Hunter Six, Allen Stone, and Andra Day.

These artists nod to the greats in their writing and honor them by covering the retro classics from the 50s and 60s. We are hearing an echo of songs woven into these new tapestries of sound by the likes of Etta James, Sam Cook, Aretha Franklin, Bill Withers, Stevie Wonder and company.

Soul, like jazz, is our American music, a direct social evolution of Jazz. From 1959–1972 the Detroit based Funk Brothers were the recording session studio band for almost all of the Motown recording artists. They created the drum, bass line, keystrokes and tambourine jingle behind Diana Ross, Marvin Gaye, and The Temptations and even Michael Jackson.

Soul is such an appealing genre because of its dedication and commitment to authenticity.

It wasn’t their name up in lights, but the Funk Brothers were arguably the instrumental backbone of the whole Motown era. The majority of these players were previously professional jazz musicians in search of a replacement for their dwindling jazz careers, and the new wave of soul music was the place to be. The beats were no longer 2 and 4, but you can’t listen to Stevie’s “Superstition” or “Sir Duke” and tell me those tracks don’t swing.

This soul music is ours, it’s familiar, and now it’s new again with fresh songs and armies of horn sections and backup singers. Soul is such an appealing genre because of its dedication and commitment to authenticity—not overly-electronic or highly-produced. The expression of raw emotion makes soul music a cathartic experience for all involved.

You can tune in to Open Air (weekdays 9am–3pm on JPR’s Rhythm & News service) to hear soul dominating the new material we play. You’ll hear artists such as Empty Houses, Eric Krasno, Hannah Gill and The Hours, and The Soul of John Black. They just keep coming at us. Tambourines, bouncing bass lines, horn sections with bari-saxophones up front, led by crooning and torchy belting. Love songs filled with sass, hip-shaking hooks and backup singers telling it like it is.

Soul is popular music again, and it feels so good. 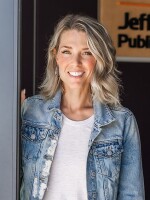 Danielle Kelly
Danielle earned a Bachelor of Fine Arts in 2007 from Southern Oregon University and has remained in the Rogue Valley pursuing a performance career -- as a model, actor, and live performance vocalist. She began hosting Open Air on JPR's Rhythm & News Service in 2015.
See stories by Danielle Kelly
JPR {in>Studio}
Your support is vital to JPR's ability to cover regional issues, and bring you fact-based news.
Contribute Now