The diversity of "Blues" music continues to reveal itself in 2013, as new releases within the genre highlight a variety of styles and approaches.

Texas blues guitar has always been richly rewarding for me, from Blind Lemon Jefferson to T-Bone Walker to Stevie Ray Vaughan. Strong vocals coupled with explosive fretwork mark the Texas tradition, and while Anson Funderburgh doesn't sing, he teams up with worthy vocalists on a couple of new outings that herald his return to recording.

The 4 Jacks - Deal With It - EllerSoul Records

The 4 Jacks are comprised of singing drummer Big Joe Maher (the "J" in Jacks), Anson Funderburgh, Kevin McKendree on keyboards and Nashville bassist Steve Mackey. Some of their first appearances were on Delbert McClinton's Sandy Beaches cruise, and all have worked with McClinton. Their album Deal With It features three covers, with the remainder written among the band, mostly by Maher. From the first song I could tell Deal With It is the real deal blues, the kind of music that pulled me in when I first heard it. Crisp yet relaxed, there's a swinging component that imparts a smile and the tapping of the feet. Their cover of Percy Mayfield's “I Don't Want to be President” shows the wry perspective of the Poet of the Blues, with fresh application to the political realities of the present. But the slow blues "Your Turn to Cry" really captures the virtuosity of the band for me, with Funderburgh and McKendree alternating in their responses to Maher's defiant vocal lines. Though blues music often employs the same 12-bar pattern, this track demonstrates the subtle complexities achievable within that framework, as McKendree's B-3 bubbles behind the singer, then blurts a response to Maher, then fades back into support. This is all done in an apparent effortless fashion, but I know it's not easy.  Fast, slow, jazzy and rocking - these Texas musicians have been working together for decades and show they can do it all with aplomb.

Guitarist Andy "T" Talamantez moved to Nashville a few years ago from L.A., where he had worked with Guitar Shorty and Smokey Wilson, among many others. He reminds me of Magic Sam or Albert Collins, and certainly has paid a lot of attention to B.B. King and T-Bone Walker. At a weekly jam session he hooked up with area legend Nick Nixon, a singer's singer who has been performing for around 45 years. Nixon befriended Billy Cox and Jimi Hendrix when they hit Nashville in the early 60's, and taught music for the Nashville Parks and Recreation Department for 35 years.  Anson Funderburgh produced this album, and plays guitar on several tracks. There's plenty of room for the singer to work his dynamics with these two guitarists, who leave more notes unplayed than played, giving the song room to breathe. This recording serves as a great demonstration of musical compatibility. Andy T's rhythm work behind the vocals weaves itself into the tapestry of feelings evoked with grace, wit and sturdy support, and his strong clear solo work never leaves the song behind.

There are some other new recordings worth mentioning. Bay Area guitarist Anthony Paule has put together a large band and a stunning live recording featuring vocalist Frank Bey, called You Don't Know Nothing (Blue Dot Records). Somebody knew something here, because this album grooves from start to stop, giving a veteran soul singer (he toured with the Otis Redding Revue) the proper showcase for his impressive chops. I've always enjoyed Anthony's playing for its range of feeling and general apropos relation to the singer and the song. Here he's put together an all-star Bay Area band, including my favorites Nancy Wright on saxophone and trombonist Mike Rinta. This was recorded last July at San Francisco's Biscuits and Blues club, a rousing triumph for music of good taste.

Blind Pig Records has released a new album by Chicago's Cash Box Kings. Black Toppin' is a tour de force for the Blues and a rich collection of the various approaches that make this music so diverse. The core group is augmented by a roster of current Chicago master musicians, including Joel Patterson and Billy Flynn on guitars and Barrelhouse Chuck on piano. Straight up Chicago blues get played here, sure, and there's also jump blues, swamp blues, Delta blues, and a hybrid of Sun Records blues and rockabilly called "blues-a-billy." With five covers and eight originals, a collective of master musicians and maybe a point to prove, the Cash Box Kings are giving us a LOT to like.

Days Like This is the name of Linda Valori's new album on LeART. She's Italian, and sure sounds like a trained singer. Indeed, she's sung four times for two popes, and is well known in Europe. This is her first blues album and I think it works well on several levels. First, she is a great great singer, reminding me of Etta James or Aretha Franklin at their best. Wonderful phrasing and timing; having a big voice requires that you know how to use it. And though she's occasionally showcased here in an almost pop context, with slick background vocals and horns, I like it because it works anyway. It's like a contrast between the gritty R&B feel of the album and polished production  - a dynamic unto itself! Her version of Ike & Tina Turner's I Idolize You just explodes, and the duet with Mike Avery on Etta James' If I Can't Have You is a brand new classic.

There's a fine reissue now available, and I want to recommend it to you. The late harmonica player William Clarke left a huge legacy which is being made available by his wife, Jeannete Lodivici, on the Watchdog label. Blues From Los Angeles, 1980 - 1991, vols. 1 & 2is just a great listen, an unexpected treat showcasing the wonderful L.A. blues scene of decades ago. Clarke's featured here backing up a variety of artists, including Johnny Dyer, Long Gone Miles, Cardell Boyette and Smokey Wilson. These tracks are golden, shining with great guitars by Hollywood Fats, Junior Watson, Rick Holmstrom and Zach Zunis. Fred Kaplan's featured a lot on piano, and so is Skip Rose, Charlie Musselwhite's old keyboardist. I had never heard of Curtis Griffin, but found him and several other "new" names most engaging. William Clarke's mentor, George "Harmonica" Smith gets some rewarding moments as well. Truly a revelation, these albums show that the L.A. blues greats were consummate musicians from the start.

There's a lot more worthy blues music being recorded (and reissued), and I invite you to listen to Late Night Blues (10pm-2am) Saturday night and Rollin' the Blues (2-3pm Sunday) on JPR's Rhythm & News Service, as Paul Howell, Dean Silver and I continue to explore the variety of this music. 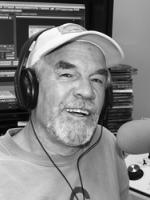