This 8-year-old's book is a hit at his library. He offers advice for aspiring authors

Dillon Helbig wrote a book over winter break and slipped it onto a local library shelf in Boise, Idaho. After librarians found it, they entered it into their catalog. Now it's on a long waiting list.

A boy finds himself magically transported to the North Pole. He's chased by a moose into a time portal that transports him back to 1621, where he joins the first Thanksgiving in colonial America.

Just when things can't get any crazier ... the boy is eaten by a giant turkey.

The latest Amazon bestseller? Nope — but it is the hottest commodity of the Lake Hazel branch of the Ada Community Library in Boise, Idaho. And it's the brainchild of 8-year-old Dillon Helbig, a second-grader who loves to read, draw and write.

Dillon has been flexing his creative muscles in storybook form since he was about 6. But recently he felt that the audience for his fiction shouldn't be limited to just mom and dad.

How Dillon snuck his book into the hearts of local readers

So, after he handwrote his latest story during Christmas break — The Adventures of Dillon Helbig's Crismis by Dillon Helbig 'His Self' (as it appears on the cover) — he hatched a plan to slip the book onto the shelves of the local library.

From a distance, the 81-page hardbound burgundy notebook looks just enough like a normal library book that Dillon felt he could sneak it in without much hassle. On a recent trip to the library with his grandmother, he put his plan into action.

"I covered this part with my hand and the rest with my body, so it looks like a normal library book," he said. "And I ran in and put it on one of the shelves — and then read a book. So I didn't look suspicious."

Dillon concocted the plan on his own, without telling his parents. Only later that night did his mother Susan ask where the book was. "He said he left it there at the library," Susan said.

When Susan called the library to see if they had put it in the lost and found — or worse, thrown it away — she learned that her fears were unfounded.

"It was clear to us that this was just a very special item," said Alex Hartman, a librarian and the branch manager of Lake Hazel.

The library found Dillon's book exceptional enough to accept it

Normally, the library staff reads book reviews before adding titles to the library's collection — but obviously this one didn't have any reviews, since it didn't go through the traditional publishing process.

"So several of the library staff, including our picture book selector, read through the book and we really just determined that it fit all of our selection criteria to be included in our library collection," Hartman said.

Speaking with NPR, Hartman was effusive in his praise of the homemade work, which he said spans genres, from fantasy to science fiction to historical fiction.

"Some of the illustrations are really quite imaginative and sophisticated in terms of perspective," Hartman said, noting a "really striking picture" of Dillon "inside of the body cavity of a giant turkey."

Dillon's parents gave permission for the library to place the book in its official catalog. At last count there were 125 people on the waitlist.

The library has heard from other children inspired by Dillon's story to write their own. And a local children's book author has now offered to work with Dillon to lead workshops for young readers at the library.

Encouraged by the public acclaim, Dillon is excited about the idea of his next book: a revised version of a previous one he wrote, about a closet that eats jackets.

"It's based on actual events," he said. "Every time I get to recess, I open the closet and my jacket is gone."

His mom and dad joked that it's a "jacket-eating closet" — and Dillon's next novel was born.

"It eats jackets for breakfast, lunch and dinner," Dillon explained.

Hafsa Fathima produced the audio version of this story.

Scott Simon
Scott Simon is one of America's most admired writers and broadcasters. He is the host of Weekend Edition Saturday and is one of the hosts of NPR's morning news podcast Up First. He has reported from all fifty states, five continents, and ten wars, from El Salvador to Sarajevo to Afghanistan and Iraq. His books have chronicled character and characters, in war and peace, sports and art, tragedy and comedy.

Matthew S. Schwartz
Matthew S. Schwartz is a reporter with NPR's news desk. Before coming to NPR, Schwartz worked as a reporter for Washington, DC, member station WAMU, where he won the national Edward R. Murrow award for feature reporting in large market radio. Previously, Schwartz worked as a technology reporter covering the intricacies of Internet regulation. In a past life, Schwartz was a Washington telecom lawyer. He got his J.D. from Georgetown University Law Center, and his B.A. from the University of Michigan ("Go Blue!"). 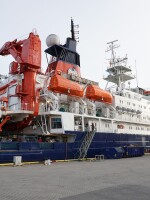