"Don't read The House of God," one of my professors told me in my first year of medical school.

He was talking about Samuel Shem's 1978 novel about medical residency, an infamous book whose legacy still looms large in academic medicine. Shem — the pen name of psychiatrist Stephen Bergman — wrote it about his training at Harvard's Beth Israel Hospital (which ultimately became Beth Israel Deaconess Medical Center) in Boston.

My professor told me not to read it, I imagine, because it's a deeply cynical book and perhaps he hoped to preserve my idealism. Even though it has been more than 40 years since its publication, doctors today still debate whether it deserves its place in the canon of medical literature.

The novel follows Dr. Roy Basch, a fictional version of Shem, and his fellow residents during the first year of their medical training. They learn to deflect responsibility for challenging patients, put lies in their patients' medical records and conduct romantic affairs with the nursing staff.

Basch's friends even coin a term that is still in wide use in real hospitals today: Elderly patients with a long list of chronic conditions are still sometimes called "gomers," which stands for "Get Out of My Emergency Room."

Like any banned book, The House of Godpiqued my curiosity, and I finally read it this past year. I'm a family physician and a little over a year out of training, and I read it at the perfect time.

I got all the inside jokes about residency — and many were laugh-out-loud funny — but I am now far enough removed that the cynicism felt like satire rather than reality.

The House of Godalso felt dated. Basch and his cohort — who were, notably, all men, although not all white — didn't have electronic medical records or hospital mergers to contend with. They wrote their notes about patients in paper charts. And it was almost quaint how much time the doctors spent chatting with patients in their hospital rooms.

It couldn't be more different from my experience as a resident in the 21st century, which was deeply influenced by technology. There's research to suggest that my cohort of medical residents spent about a third of our working hours looking at a computer — 112 of about 320 working hours a month.

In The House of God, set several decades before I set foot in a hospital, where were the smartphones? Where was the talk of RVUs — relative value units, a tool used by Medicare to pay for different medical services — or the push to squeeze more patients into each day?

That's where Shem's new book comes in. Man's 4th Best Hospital is the fictional sequel to The House of God, and Basch and the gang are back together to fight against corporate medicine. This time the novel is set in a present-day academic medical center, and almost every doctor-patient interaction has been corrupted by greed and distracting technology.

Basch's team has added a few more female physicians to its ranks, and together they battle a behemoth of an electronic medical record system. The hospital administrators in Shem's latest book pressure the doctors to spend less time with every patient.

If The House of Godis the great medical novel of the generation of physicians who came before me, perhaps Man's 4th Best Hospitalis the book for my cohort. It still has Shem's zany brand of humor, but it also takes a hard look at forces that threaten the integrity of modern health care.

I spoke with Shem about Man's 4th Best Hospital(which hit bookstores this week) and about his hopes for the future of medicine.

This interview has been edited for clarity and length.

The protagonist in Man's 4th Best Hospital , Dr. Roy Basch, doesn't have a smartphone. I hear you don't either. Why not?

If I had a smartphone, I would not be able to write any other novels. I have a bit of an addictive personality. I'd just be in it all the time. ... I've got a flip phone. You can text me, but it has to be in the form of a question. I have this alphabetical keyboard. You either get an "OK" or an "N-O."

A big theme in the novel is that technology has the potential to undermine the doctor-patient relationship. What made you want to focus on this?

I got a call out of the blue five years ago from NYU medical school. They said, "Do you want to be a professor at NYU med?" And I said, "What? Why?" And they said, "We want you to teach." When I first got there, because I had been out of medicine [and hadn't practiced since 1994], I figured, "Oh, I'll look into what's going on." And I spent a night at Bellevue.

On the one hand, it's absolutely amazing what medicine can do now. I remember I had a patient in The House of God [in the 1970s] with multiple myeloma. And that was a death sentence. We came in; we did the biopsy. He was dead. He was going to be dead. And that was that. Now it's curable.

At Bellevue, I saw the magnificence of modern medicine. But like someone from Mars coming in and looking at this fresh, I immediately grasped the issues of money and effects of screens — computers' and smartphones'.

And it just blew me away. It blew me away: the grandeur of medicine now and the horrific things that are happening to people who are really, sincerely, with love, trying to practice it. They are crunched, by being at the mercy of the financially focused system and technology.

In Man's 4th Best Hospital, there's a fair amount of nostalgia for the "good old days" of medicine in the 1960s and 1970s, before electronic medical records. What was better in that era?

If you ask doctors of my generation, "Why did you go into medicine?" they say, "I love the work. I really want to do good for people. I'm respected in the community, and I'll make enough money." Now: ... "I want to have a good lifestyle." Because you can't make a ton of money in medicine anymore. You don't have the respect of your community anymore. They may not even know much about you in a community because of all these [hospital] consolidations.

Do you think anything in medicine has gotten better?

The danger of isolation and the danger of being in a hierarchical system — students now are protected a lot more from that. When I was in training, interns were just so incredibly exhausted that they started doing really stupid things to themselves and patients. The atmosphere of training, by and large in most specialties, is much better.

You wrote an essay in 2002 titled " Fiction as Resistance ," about the power of novels to help make political and cultural change. What kind of resistance today can help fix American health care?

When somebody falls down, up onstage at a theater, do you ever hear the call go out, "Is there an insurance executive in the house?" No. If there are no doctors practicing medicine, there's no health care. Doctors have to do something they have almost never done: They have to stick together. We have to stick together for what we want, in terms of the kind of health care we want to deliver, and to free ourselves from this computer mess that is driving everybody crazy, literally crazy.

Doctors don't have a great track record of political activism, and only about half of physicians voted in recent general elections. What do you think might inspire more doctors to speak out?

Look at the difference between nurses and doctors. Nurses have great unions, powerful unions. They almost always win.

Doctors have never, ever formed anything like what the nurses have in terms of groups or unions. And that's a big problem. So doctors somehow have to find a way — and under pressure, we might — to stick together. Doctors have to make an alliance with nurses, and other health care workers, and patients. That's a solid group of people representing themselves in terms of what we think is good health care.

The profession we love has been taken over, with us sitting there in front of screens all day, doing data entry in a computer factory.

Health care is a big issue for the upcoming election. What kind of changes are you hoping we'll see?

There will be some kind of national health care system within five years. ... You know, America thinks it has to invent things all over again all the time. Look at Australia. Look at France. Look at Canada. They have national systems, and they also have private insurance. Don't get rid of insurance.

One of the major criticisms of The House of God is that it's sexist. It seems like your hero, Dr. Basch, has gotten a little more enlightened by the time of Man's 4th Best Hospital. Does this reflect a change you've also experienced personally?

I was roundly criticized for the way women were seen in The House of God.

I remember the first rotation I had as a medical student at Harvard med was at Beth Israel, doing surgery. It got to be late at night, and I was trailing the surgeon around, and he went into the on-call room. There was a bunk bed there, and he started getting ready to go to bed. And I said, "Well, I'll take the top bunk." And he said, "You can't sleep here." So I left, and in walked a nurse. I was shocked.

Things have changed, and I am very, very glad. I don't know if it seems conscious — I was very pleased to have total gender equity in the Fat Man Clinic [where the characters in Man's 4th Best Hospitalwork] by the end of the book.

What made you feel like it was time to update The House of God?

I write to point out injustice as I see it, to resist injustice, and the danger of isolation, and the healing power of good connection. ... We can help our patients to get better — but nobody has time to make the human connection to go along with getting them better.

Mara Gordon is a family physician in Camden, N.J., and a contributor to NPR. You can follow her on Twitter: @MaraGordonMD. 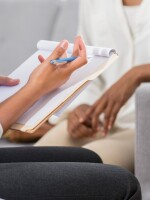 Mara Gordon
Your support is vital to JPR's ability to cover regional issues, and bring you fact-based news.
Contribute Now