A gun-wielding pro-Trump rally was overwhelmed by counter protestors in downtown Eugene, Saturday. An estimated crowd of 300 people overflowed the Free Speech Plaza onto 8 th avenue. Despite one arrest and some heated confrontations, the events remained mostly peaceful.

The event fueled opposition earlier in the week when organizers fueled controversy by refusing to cancel the rally after 2 mass shootings killed 31 people.

Jason Marks, from Harrisburg, stood with an AR-15 slung over his shoulder. He stood away from the crowd,

“I don’t really like carrying a rifle in public, I mean you can do it and it’s your right and all that and I try not to do it,” he said.

Marks said the shooting in El Paso, where a gunman target Mexicans and killed 22 people, was tragic.

Marks says there’s never going to be a good time to talk about guns. But, for Harold Brennan who’s from El Paso the timing was provocative.

Brennan waved an upside down American flag, which is considered a sign of distress. He said he showed up to the rally to denounce hate.

“We’re under attack, this is a war going on now against the Mexicans and the immigrants, and people of different religions,” Brennan said.

The rally was originally called “God, Guns, and Trump”, but a couple days before, it was renamed “God, Guns, and Liberty” and described on Facebook as patriotic event. Participants were invited to bring their firearms, including AR-15s. Sam Owens wore a MAGA hat and a holstered gun. He said he wants to support the 2 nd amendment.

“I don’t normally attend rallies like this. I just felt like I should be here because, guns are a big part of American culture,” he said.

Owens said he carries a gun everywhere he goes, but he didn’t choose to bring his AR-15.

“Just because I thought that would be, what’s the word I’m looking for? Maybe a trigger. But I’m not going to change the way I live just because I come to downtown Eugene,” he said.

There were about 2 dozen people carrying guns. They were outnumbered by a combination of black-clad Antifa members, local peace activists, and others. When the Trump supporters first came into the plaza, there were scuffles and the crowd chanted loudly.

The group left the plaza after about 10 minutes and spent the next 2 hours on the sidewalk along 8 th Avenue, across from Saturday Market.

Police closed the street. There was one arrest, of a man who was described as head-butting people. Police say he was carrying a helmet and had a wrench taped to his wrist.

”But I’m really impressed that everybody’s being respectful and giving space. I’m pleased at the turnout of people who are concerned about peace issues. As an expression of free speech and peaceful assembly, I think you got it right here,” Semple said.

The events drew crowds away from the Saturday Market and Farmers Market across the street. Beverly Vazquez is with Lonesome Whistle Farm.

“We’re local farms and people out here just trying to make our living. And this is our livelihood and the one day a week that we come out for market. So, it’s frustrating to have people feel intimidated about coming down to the market they come to every week,” she said.

As the rally was underway, Eugene Resident Elise Edmondson stood on the corner by the Saturday Market.

“This is my neighborhood. We live in a country of freedoms right. And we live in a state, fortunate or not, where they have the right to open-carry. However, it’s the worst possible timing,” she said.

Edmondson pointed to the mass shootings last weekend in El Paso and Dayton. And that the rally was scheduled on the same day as Eugene Springfield PRIDE. A black pickup truck with an American flag and

pro-trump signs drove by honking as Edmondson said the ralliers had clear intentions.

“They know that a place like Eugene is going to be the one spot that they can invoke a response, cause we’re intruding on their rights. Which is absolutely not true. What they’re doing is intimidation and fear for the small minority that’s in this town. It’s horrible. I’m afraid to walk home by myself,” she said.

Some attendees saw the events of Saturday as a precedent moving forward into a tumultuous election year. Even Eugene Police Captain Eric Klinko who spoke with reporters after the rally.

“2020 will be an election year. Potentially a politically divisive one. I would expect there to be other events like this. But there was also some discourse,” Klinko said.

It’s unclear how the next year will unfold.  Counter protesters showed up were in greater numbers than those with guns and Maga hats. And many tried to deescalate feelings on both sides.

On the rally Facebook page later Saturday, one organizer wrote “Til next time,” Eugene. 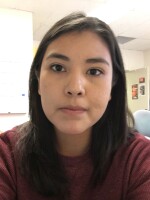