Countries Around The World Move To Repeal 'Marry Your Rapist' Laws

Many countries are moving to repeal long-established laws that allow rapists to escape punishment if they marry their victims.

A handful of places have recently repealed these laws, including Tunisia, Morocco and, just last week, Jordan.

But these laws are still on the books in countries as far apart as the Philippines, Lebanon and Tajikistan. Purna Sen, policy director for UN Women, tells NPR's Ari Shapiro these laws were enacted in order to normalize illicit sexual contact by categorizing this conduct as part of the institution of marriage.

These laws enable societies to make sexual relations more respectable, as it is often considered problematic in some cultures, Sen said. The penal codes in these countries do not approach rape as violence or abuse, but focus more on the idea that sexual contact occurred outside of marriage.

"It's not been really distinct as rape, as force and abuse and violence, the way we think about it predominantly now; it's been more thought about [as] illicit sexual contact," Sen said. "And so the way to make that respectable is to put it within the institution of marriage."

Unlike other laws that were enacted years ago, Sen said these "marry your rapist" laws remain enforced around the world.

The repeal of these laws can be attributed to a growing global consensus that rape and sexual abuse is unacceptable. Sen said it is a significant trend that has taken off over the past 20 years.

Sen said this is a result of women's organizing and increased awareness among policymakers, most notably marked by a United Nations goal to remove all violence against women by 2030.

While the legal system allows rapists to find immunity, many women also feel pressure from their families to marry the men who abused them.

Sexual relations outside of marriage, even if they are forced, are "often interpreted as a slight or as a stain on a collective honor or integrity," Sen said.

"So it's often actually from their own families that women ... feel under pressure to marry the man who has abused them," she said. "They don't want to be dragged through court. They don't want it known that woman has become ... 'impure' in any way because that will then damage the prospects for her having a marriage that has some respectability for her family."

Sometimes women take their own lives rather than submit to this kind of a relationship. The suicide of a 16-year-old girl in Morocco prompted that country to rescind its law in 2014.

"Unfortunately, it was [at] the cost of that young girl's life, but for others who followed, it will hopefully be a much better situation," Sen said. 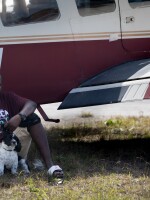 Samantha Raphelson
Your support is vital to JPR's ability to cover regional issues, and bring you fact-based news.
Contribute Now