It’s not easy or cheap to create a railroad quiet zone. The multi-million dollar proposal suggests increased safety measures at 10 crossings in downtown Eugene and the Whiteaker neighborhood.

Brian Richardson is with the City of Eugene. He says proposed medians, pedestrian gates, and other safety measures will allow for a “whistle free” zone.

Richardson: “The railroad wants to have certain safety measures in place because really the real reason they blow all of their horns is they can make sure people know that they’re coming.”

The Railroad Quiet Zone could cost between $6.8 and 7.3 million. The City has not identified a funding source.

The public can comment on the proposal through this month. The citizen panel drafting the proposal meets again in May to review comments and make a recommendation to City Council. 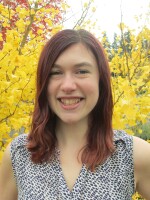 Kyra Buckley
Kyra Buckley has been a volunteer in KLCC’s newsroom since August 2015. She will graduate from the University of Oregon in December 2015 with a BA in Journalism and Political Science. At the UO she held leadership positions on student run publications like Envision, an online environmental magazine, and This Oregon Life, a storytelling podcast.
Your support is vital to JPR's ability to cover regional issues, and bring you fact-based news.
Contribute Now