And it's time now for our regular segment Words You'll Hear. This is where we try to understand stories we'll be hearing in the coming days by analyzing some of the specific words we'll undoubtedly hear in those stories. So what are two crucial words you're going to hear this week? Art, Barry, help us out.

ZWERDLING: Yes, thank you (laughter) April fools'. These are two of NPR's most senior producers, Art Silverman from ALL THINGS CONSIDERED, welcome.

ZWERDLING: And they've helped create an ancient tradition here at NPR. They create a story every year that's pure fiction - I mean, it's completely outrageous - and they slip it in with real stories on ALL THINGS CONSIDERED or Morning Edition. And it is up to you the listeners to catch it. And we hope some of you have actually been suckered in by these stories. Art, let's start with you. What are - what's one of your favorite ones?

SILVERMAN: Well - and not to take all the credit, I arrived here when colleagues already had been doing this, and many of them inspired me. And I decided - I think raise it to another level by making the parodies actually be criticisms of things that NPR was doing that we did too much.

And I think my favorite is a piece I did that mirrored and poked fun at a piece that Noah Adams and I did about maple sugar harvesting on this very program years ago. So my theory was what if these trees weren't being tapped? Wouldn't the pressure build up? And I created a piece about exploding maple trees and the injuries they cause and the harm this is doing to people in Vermont and New England areas.

ROBERT SIEGEL, BYLINE: An untapped tree is a time-bomb waiting to go off.

UNIDENTIFIED MAN: Oh, watch it - be careful there.

SILVERMAN: And part of it is - part of what I enjoy doing - the listener - some people got fooled - we try to keep it just at the level of being possible.

ZWERDLING: And Barry Gordemer, what's one of your favorites?

GORDEMER: Well, I have to say I can't take credit for the one which is my favorite. This was done by a group of great brains on Morning Edition. And this was an idea of - called 3-D eye surgery. So 3-D movies are really popular, but the worst part about them - you have to wear these big, bulky 3-D glasses.

GORDEMER: They're uncomfortable, they're not a good fashion statement.

ZWERDLING: They're probably dirty, even though they say they're not.

GORDEMER: Right, right. So we had a story about a doctor who had come up with surgery so you would not need the 3-D glasses. You could just see them with your naked eye.

RENITA JABLONSKI, BYLINE: (As Rebecca Stern) Seeing "Gnomeo and Juliet" without those horrible glasses was life-changing. There are no words to describe it.

LAURA KRANTZ: (As Jen Sands-Windsor) There are still some kinks to work out.

KEVIN BEESLEY, BYLINE: (As Dr. Sebastian Marsh) Some patients have complained of blurred vision when they are not looking at 3-D screens. So we're actually working now on some special corrective lenses that will allow our patients to see real life normally.

ZWERDLING: So maybe - so there have been other great stories. There was the one about how the Reagan administration had decided to sell Arizona to Canada. Some people believed that. A story about how Nixon had decided to run again in 1992. People were outraged. How could he run a third time? It's unconstitutional. What does it take for listeners to be completely gullible?

GORDEMER: In the case of the 3-D eye surgery, it was played completely straight. It sounded like a standard NPR report, nothing to clue us in. And we got so much angry email because people really bought it.

SILVERMAN: My theory is you should try start to slowly give it away. So by the end, the doubts arise until you reach a crescendo of absurdity in which the listener is no longer necessarily fooled.

GORDEMER: Yeah, and we may have - we may have not done that well. We did put a line at the end that this surgery would be more available on April 1, but I think it was probably too subtle.

ZWERDLING: So folks, don't say we didn't warn you. That was Morning Edition producer Barry Gordemer, ALL THINGS CONSIDERED producer Art Silverman. Guys, thanks a lot.

ZWERDLING: And now an important alert. April is not just for practical jokes. It's also poetry month. So with that in mind, we are asking for your poems - not pranks, poems - rhyming couplets, sonnets, limericks, prose. We want to hear it all. So please tweet your poetry to @npratc. Use the hashtag #NPRPoetry. And each weekend, we'll read a few of the submissions on the air. Happy tweeting. Transcript provided by NPR, Copyright NPR.

Art Silverman
Art Silverman has been with NPR since 1978. He came to NPR after working for six years at a daily newspaper in Claremont, New Hampshire. 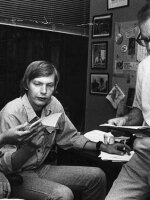 Daniel Zwerdling
Daniel Zwerdling is a correspondent in NPR's Investigations Unit.
Your support is vital to JPR's ability to cover regional issues, and bring you fact-based news.
Contribute Now