I was walking through town the other day, humming the tune from the Little Drummer Boy and ticking off in my head the exciting list of things I had to do for Christmas, when I ran into Tom, Dick, and Mary Scrooge. “This could be a sour note in a merry day,” I thought, but stopped to say hello anyway because, after all, it is Christmas.

“I hate Christmas,” they said, as I had expected.

“How too bad,” I sympathized. “I love Christmas.”

“It’s so over-commercialized,” they whined in their tiresome clichés. “I hate muzak Christmas carols and all the Santa Clauses that say, ‘Buy, buy, buy,’ — plastic wreaths, plastic bells, plastic toys. I hate the mall — it’s so crowded. It’s so expensive. I hate the obligation of buying present,” and they told me a story they had read in the paper about a Japanese visitor to America who said he couldn’t understand this month-long celebration of shopping.

I didn’t really want to argue (let them be happy in their misery, I thought), but it is the season of helping those less fortunate than ourselves, which they are, so I tried.

“Yeah?” they sneered. “And not give anybody anything? We can’t do that.”

“You could if you wanted to,” I pointed out, “but what I meant was to make gifts instead of buying them.”

Tom, Dick, and Mary Scrooge gave a short merriless laugh. “We don’t know how to make anything,” they objected, and I said, “I didn’t know how to make hammocks until I decided to give them for Christmas one year. Or try reading books on tapes. That’s hardly a crafts skill. All you need is a little imagination. It’s ever so much more fun to make gifts than to buy them — and it costs less, too, but the best thing is that while you’re making things, you’re thinking about the particular person that particular present is for, and so good love gets sewn or hammered into each project.”

Tom, Dick, and Mary said something that sounded like a snorted “Hmph” but could have been a thoughtful, “Hmm,” and I said, a little lamely, that wrapping their own presents might do a little of the same thing. They said they weren’t religious, anyway, so why should they do anything for Christmas?

Tom, Dick, and Mary Scrooge looked at me with apathetic astonishment. “Joyful?” They repeated. “Why?”

“Well, because,” I began in exasperation, thinking I’d say, “because without an excuse for joy we might forget to include it,” but then I gave up all the logical arguments because, after all, the answer was everywhere around them, anyway, if they would only see it.

“Because it’s so much fun,” I said at last. “Here, have some cookies. I made them just this morning.” 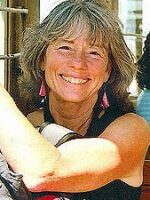 Diana Coogle
Diana Coogle has been a JPR commentator for more than twenty years. She recently wrote a Ph.D. dissertation on Old English poetry and is currently working on a paintings-and-essays book with Applegate artist Barbara Kostal. Her first book of collected commentaries was an Oregon Book Award finalist. Her latest book, co-authored with Janeen Sathre, is Favorite Hikes of the Applegate: A Trail Guide with Stories and Histories.
See stories by Diana Coogle
Your support is vital to JPR's ability to cover regional issues, and bring you fact-based news.
Contribute Now