On Sept. 2, 2022 a fire erupted in the Roseburg Forest Products mill in Weed, California. Over the course of this devastating fire, it burned thousands of acres and leveled more than 100 structures. Much of that loss was in Lincoln Heights, a historically Black neighborhood dating to the 1920s.

We were joined by second generation Lincoln Heights resident Al Bearden and documentarian Mark Oliver on a recent episode of Underground History to discuss the history of the community and where it stands today.

Two people were tragically killed in what was dubbed the Mill Fire and others were injured. Out of the roughly 60 homes that comprised the Lincoln Heights neighborhood, just a dozen survived. The loss of this close-knit community is similar to some of those lost in Southern Oregon’s 2020 Almeda Fire, where neighborhoods comprised of friends and extended families were destroyed and the complex web of insurance, extreme housing costs, and other barriers have made them nearly impossible to recreate.

In the 1920s, hundreds of African Americans came to Weed from the southern states to work at the mill, along with Italians and other ethnicities. While many towns relied on similar labor pools to support mills and other industries, Weed is unique in that this population put down roots and has remained in the area for generations.

Unsurprisingly, for the Black residents of this small rural town, life was not always easy. In the early years, the Black community was effectively segregated to an area called The Quarters, which included businesses and a cemetery, in addition to family homes. This area was later renamed Lincoln Heights.

The mill provided steady work for families, but Black men were barred from the more specialized jobs that many were more than qualified for. The second generation fought for change in the community after a chapter of the Congress of Racial Equity (CORE) was established in Weed in 1966. Residents used protests, marches, and boycotts to encourage local businesses to end discriminatory hiring practices and to allow the Black community to work in the very businesses that their dollars supported. The community also pushed to swap out the Southern street names that comprised their neighborhood- and Dixie, Texas, Louisiana, and Alabama Avenue were replaced with Crestmore, Alameda, Church, and Wakefield Avenues respectively. These peaceful demonstrations were effective at breaking down some of the segregation that dominated the community throughout the mid-20th century. Al Bearden’s brother, Charles Byrd, became the first African American man to be elected sheriff in the state of California in 1986, and went on to serve the region for four terms.

The cluster of buildings and people that was, and hopefully can be again, the neighborhood of Lincoln Heights represents what we call ‘Intangible Cultural Heritage.’ It is a significant part of the history and culture of Siskiyou County, and the fire has left its future unclear. Residents are struggling to get the support they need to rebuild this neighborhood and keep the community together. Many of these homes were passed down through multi-generational families, and insurance premiums often don’t come near the actual costs of replacing an historic building. To further complicate things, zoning laws have changed since the buildings were built in the early 20th century, and as a result, many of the lots will not be approved for the same size and configuration of buildings that were there before. It can be tricky for folks to find housing while they sort out the long process of rebuilding, which will likely lead to a demographic shift for the neighborhood and town as residents are forced to move elsewhere.

Oliver’s 2011 film From the Quarter to Lincoln Heights, which he produced with James Langford, provides a fascinating overview of the community. The film is rich with photos and personal stories about current and former residents of Weed and the surrounding communities of McCloud and Mount Shasta. This film both memorializes and underscores just how much was lost to the fire. Sadly, it took this fire for me to learn about the community of Lincoln Heights. I hope others will join me in recognizing its importance to the region and look for ways to support its residents in sustaining it for the next 100 years.

You can pick up a copy of From the Quarters to Lincoln Heights on Mark Oliver’s website, and learn more about his other projects in the region:

From the Quarters to Lincoln Heights 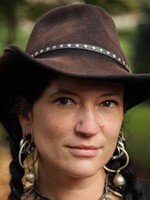 Chelsea Rose
Chelsea Rose is an archaeologist with the Southern Oregon University Laboratory of Anthropology (SOULA) and co-host of Underground History, a monthly segment that airs during the Jefferson Exchange on JPR’s News & Information service.
See stories by Chelsea Rose
Related Content
Your support is vital to JPR's ability to cover regional issues, and bring you fact-based news.
Contribute Now