UZHHOROD, Ukraine — On the darkened stage of a borrowed theater in the far west of Ukraine, Vira Lebedynska is rehearsing a difficult scene about losing a son.

Though she doesn't speak a single word, the spotlight shines on her face as her character struggles with grief and memories.

"This scene really hits my heart," says Lebedynska, 64, a classically trained singer and actress with Greta Garbo eyes and a sonorous voice. "And it's about the story inside this scene."

The play, called Cry of a Nation, is about Vasyl Stus, the Ukrainian poet and writer who died in a Soviet labor camp in 1985, when he was just 47. The play, which runs through this weekend in Uzhhorod, is about what Stus sacrificed for Ukrainian culture. It also reflects what Ukrainians are sacrificing today to keep their culture safe from Russia's violence.

The theater troupe actors and its director were displaced from Mariupol, the southern port city that Russia destroyed and now occupies. Russian troops bombed Mariupol's theater four months ago as hundreds of civilians, including children, sheltered inside. Those civilians had written the Russian word for children in giant letters on the ground outside. Many died.

Lebedynska was inside. She remembers a teenage girl and her family clinging to each other as a wall fell on them. As the building started to collapse on her, she and others ran for their lives, stepping over dead bodies to get out of the crumbling building.

"We kept running until we reached the sea," she says. "We saw dead people buried in the sand there. I looked back toward the theater, and everything was black. It felt like the end of the world."

She escaped from Mariupol and moved from city to city in Ukraine, one of more than 7 million Ukrainians internally displaced by Russia's war. Traumatized and out of work, she grew depressed.

"I was barely alive, not thinking about the future, about anything," she says. "And then our director called and said, 'do you want to work again?'"

Liudmyla Kolosovych is the Mariupol theater's artistic director. Tiny, intense and no-nonsense, she's directed dozens of plays — "all of them in Ukrainian, I'm proud to say." Her actors call her relentless and praise her drive and creativity.

She ended up in Uzhhorod, a cobblestoned city near the border with Slovakia, after the regional governor here worked out a deal with the local theater to share space with her troupe.

Kolosovych says she's determined to show that though the Russians destroyed Mariupol's theater — they did not destroy its talent.

"I watch these actors and I think these are the very best," she says. "They are so powerful, so good at what they do. I don't need anyone else but them."

Both Kolosovych and Lebedynska admit, with bitterness, that some members in the Mariupol troupe went to Russia. Kolosovych got in touch with those in Ukraine who survived the siege of the city and told them to come west. They found housing at university dormitories.

Last month, after reading Vasyl Stus' collected letters and poems, they wrote Cry of a Nation together. The name comes from a Stus quote that says the world only needs an artist when his art is like the cry of a nation.

"When we ended up here in Uzhhorod, we realized how lucky we were to see anyone who escaped the Mariupol theater alive and unharmed," he says. "Because some of our colleagues didn't make it."

The night of premiere was July 16 — exactly four months after the Mariupol theater was bombed. The audience includes soldiers on leave, grandmothers in high heels, and the director of Uzhhorod's theater, Vasyl Mariuhnych, who is sharing his stage with the Mariupol troupe. He says several members of his own acting troupe are now soldiers on the frontline.

"I really want them, the Mariupol troupe, to feel at home here," he says. "I want us to collaborate and share ideas."

The stage darkens, and the audience is silent. The actors walk into the spotlight. The play follows Stus' life from an idealistic young teacher of Ukrainian language to a persecuted dissident wasting away in a Soviet labor camp.

The cast members pull black nylon stockings over their faces to portray the poet's Soviet tormentors as faceless zombies. One goose-steps like a Nazi.

As Stus is shown dying after a long hunger strike, the spotlight falls on his mother, played by Vira Lebedynska.

It's that difficult scene that takes her back to Mariupol. She peers into the audience with wide eyes that glisten with her own pain.

The audience weeps, too.

Cry of a Nation ends with a call to keep fighting for Ukraine. The audience erupts into cheers and a standing ovation.

The troupe takes a bow. Kolosovych, the director, hopes to take the play on the road to Europe. Vira Lebedynska holds a bouquet of flowers and trembles.

Being on stage again is a miracle, she says. It's also a reminder of what Ukraine has lost. 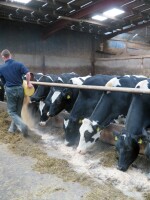