Menstrual Huts Are Illegal In Nepal. So Why Are Women Still Dying In Them?

This month saw the first arrest in Nepal connected to the practice of exiling women to sleep in a hut behind their home during menstruation.

On Dec. 6, police in the western district of Achham took Chhatra Raut into custody for questioning after his sister-in-law, Parbati Buda Rawat, 21, was found dead in a menstruation hut, apparently because of smoke inhalation — after her blanket caught fire while she slept. According to press reports, he is being held while investigators determine if he forced her into the hut.

Several women are killed every year in Nepal because of chhaupadi,the practice of exiling women from their homes to bare-bones huts or sheds during menstruation because they are believed to be "unclean." Exact numbers are difficult to obtain, as many fatalities and injuries go unreported, but while sleeping in the huts, women are at risk of snake bites, physical assault, freezing temperatures and suffocation because of lack of ventilation.

Forcing women to use the huts was criminalized last year. Chhatra's arrest sent a signal that the tide may be slowly turning against chhaupadi, which has been widely condemned by human rights activists.

But it's unclear if the law will be an effective deterrent. For one thing, even if Chhatra is charged and convicted, the penalty is light: a three-month jail sentence and a fine of 3,000 rupees (about $30).

There are other problems with the law, according to a study published last week in the journal Sexual and Reproductive Health Matters.

The study found that 77% of west-central Nepali girls and young women actively practice menstrual exile, based on a survey of 400 14-to-19-year-olds. And while 60% of them were aware that chhaupadiis illegal, that knowledge made them no less likely to practice it.

"On the optimistic side of things, that result suggests that girls are aware of their rights," says study author Jennifer Thomson, a lecturer in comparative politics at the University of Bath. "But they don't feel able — or they are unable — to exercise those rights."

Menstrual taboos, the study found, are "most keenly enforced" by elder family members, "including mothers, grandmothers and other senior women," as well as religious leaders and traditional healers.

"We found that arresting somebody is a quick and easy measure, but changing attitudes, changing mindsets, changing practices, is going to take years," Thomson says.

Sociologist Saruna Ghimire, an assistant professor of sociology at Miami University in Ohio, who grew up in Nepal, agrees that legal interventions can only go so far. The fact that it took nearly 18 months for the first arrest to be made is proof that the law will be extremely difficult to enforce, she says. And she points out that the practice was actually first declared illegal by the Nepali Supreme Court back in 2005 — but it wasn't until August of last year that criminal penalties were assigned.

In a separate 2018 study of 107 adolescent girls on the prevalence of chhaupadiin far-western Nepal, Ghimire cites a previous "well-intentioned" attempt earlier in the decade by government and nongovernment agencies to solve the problem by demolishing the huts. The result, the study found, was that "sheds were either rebuilt or menstruating women and girls were exiled to even more unhygienic and dangerous structures," such as sheds shared with livestock.

Ghimire's study found that while 72% of adolescent girls in a far-western Nepali province practiced menstrual exile, 100% of the girls were restricted by some form of menstrual taboo.

"The problem goes beyond the huts, and it's not just a problem in the rural, western part of the country," Ghimire says. "In the cities, many women still follow 'untouchability' taboos. As a young woman in eastern Nepal, during my period I was not allowed to touch food, touch the water tap [according to the taboos, menstruating women can eat and drink only when food and water are offered to them], watch TV with my dad or play with my brother. I gave those taboos up when I went off to do my undergraduate. But my mother and sister still follow the taboos. Every other woman in my family does."

While the women in Ghimire's study reported that they adhere to menstrual taboos primarily because of societal and familial pressure, they voiced willingness to discontinue practicing them "if given a choice."

That choice could come in the form of a cash payment, for women in one rural province. The chairman of a rural western province announced in early December that he would give a cash reward of 5,000 rupees (about $44) to women who reject the use of the sheds, according to a Thomson Reuters Foundation report. (The chairman didn't respond to a request for comment.)

Ghimire says this plan is reminiscent of a 2005 Nepali government initiative that offered cash to women to give birth in a medical facility, instead of in a menstruation hut, where many traditional births take place. It was part of a multipronged campaign to reduce Nepal's then-high maternal mortality rate. The cash incentive program did seem to contribute to the decline in childbirth-related deaths in the country.

"These punishments and incentives are symbolically positive," says , a Nepali nurse who has been advocating to end the taboos and stigma surrounding menstruation for 40 years. "But they do not address the underlying cause of why women follow restrictions during menstruation. And that is lack of education, and fear."

Paudel founded the in 2016 to educate women, girls and men about menstruation and to end the perception that the menstruating body is "impure" and "dirty." She says she's frustrated by solutions that start and stop at the huts, since that's only one of many menstrual taboos practiced by a majority of Nepali women, such as avoiding touching male relatives.

That means arrests and dismantling huts can only go so far, she says: A deeper cultural transformation is ultimately required.

"These taboos perpetuate the idea that women are less powerful than men," she says. "This is about human rights, and dignity." 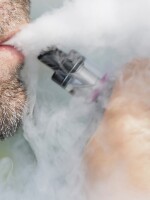 Emily Vaughn
Your support is vital to JPR's ability to cover regional issues, and bring you fact-based news.
Contribute Now