Moderate Democrats are split over how to vote on impeachment. On one hand, you have New Jersey Representative Jeff Van Drew. He opposes impeachment and now plans to switch parties and become a Republican.

On the other hand, there's Michigan Congresswoman Elissa Slotkin. She spent all weekend thinking about her vote. Then, in an op-ed published today in the Detroit Free Press, she announced her choice. She is now for impeachment. Now, before we hear directly from the congresswoman, let's hear how she explained her decision to voters. Reporter Abigail Censky of WKAR was at Slotkin's town hall event earlier today.

ABIGAIL CENSKY, BYLINE: Slotkin billed this is a community meeting in Rochester, Mich. But inside the room, it felt like two worlds as she shouted over protesters to announce how she'll vote on impeachment.

ELISSA SLOTKIN: While we may not agree, I hope you believe me when I tell you that I made this decision out of principle and out of a duty to protect and defend the Constitution. I feel that in my bones. And I will stick to that regardless of what it does to me politically because this is bigger than politics.

CENSKY: Some were spitting mad about her decision and there to let her know, shouting four more years and deep state. Others were there to show their support for the first term congresswoman who represents a district that voted for President Trump in 2016. Tim Sawmiller is a retiree who says supporting impeachment will help Slotkin keep her seat next year.

TIM SAWMILLER: Well, it's a brave decision in a swing district. I think she'll definitely have Democrats in her corner. Had she voted no, I think she would have ended her political career.

CENSKY: Steve Dean is a photographer who was holding an impeach Slotkin sign.

STEVE DEAN: Did you watch those hearings? Those hearings were, how did you know? Well, everyone knows. Well, how do you know? Do you have any evidence? Were you on the phone call? No. Well, someone else said. When they get the guy who said, he says, oh, it was speculation.

CENSKY: Before the meeting, Deane was waiting in line and got into an argument with Michel Bryant. She's a nurse and veteran who supports Slotkin and says voters need to put country over party.

MICHEL BRYANT: When I see individuals come and have signs that says Democrat hate, you know, our country and that, you know, Elissa should be impeached - why? For doing her job?

CENSKY: The only time the heckling quieted down was when she talked about things like prescription drug pricing or water quality. Then it appeared people were listening. 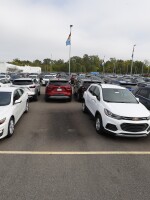 Abigail Censky
Abigail Censky is the Politics & Government reporter at WKAR. She started in December 2018.
Your support is vital to JPR's ability to cover regional issues, and bring you fact-based news.
Contribute Now