A Father's Advice: The Choice To Start A Family Is 'An Act Of Hope'

Jessica Kibblewhite grew up the daughter of an astronomer. Her dad, Edward Kibblewhite, invented, among other things, a system that allows scientists to take clearer pictures of stars.

Given his background, Jessica asked him for help finding clarity on a different subject: starting a family.

The world, Jessica told Edward at StoryCorps last October, seemed like an especially difficult place, and she and her husband had been struggling with the idea of bringing children into it.

She felt scared for the future.

Edward, now 75, asks her what the alternative is.

"Not having a kid in the 21st century," Jessica says.

"I think if you do not have children because you fear the future, that is to misunderstand what it means to be human," he says.

Edward says he grew up during a time of great fear as well. He was born after World War II, and there was an Air Force base with a missile site not far from his high school. Students were invited to tour the facility and touch the warhead of a hydrogen bomb.

"We were pretty sure that these missiles would be fired," he says. "I had a whole plan I had worked out – an underground place to go. ... I mean, the whole population believed we would be burned to death."

"Having you as a daughter was a very moving experience, and in the case of my parents, WWII started on Sept. 1, 1939. My sister was born the next year," he says. "So having children is an act of hope, and if you do not have children because of fear, then you have given up hope for the future."

For Jessica and her husband, Sam Horn, the StoryCorps conversation played a big role in their decision to try to start a family.

StoryCorps is a national nonprofit that gives people the chance to interview friends and loved ones about their lives. These conversations are archived at the American Folklife Center at the Library of Congress, allowing participants to leave a legacy for future generations. Learn more, including how to interview someone in your life, at StoryCorps.org . 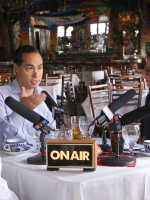