The last time Caroline Kennedy led an aircraft carrier christening, she was 9 years old. Fifty-two years later, she'll be the one breaking the bottle against the bow of the USS John F. Kennedy as her mother Jacqueline previously did.

Ambassador Kennedy and her family will join an estimated 20,000 guests on Saturday to officially christen the new ship.

And as the famous family arrives in Newport News, Va., for the invite-only ceremony, the men and women who built the ship are marking the moment.

"Anytime you christen a ship, it means a lot to the shipbuilders," Lucas Hicks says.

"This is their day," Hicks says. "Commissioning is the Navy's day. The christening is the shipbuilders' day. So it means a lot to us."

Newport News Shipbuilding laid the keel of the Kennedy in the shipyard's dry docks in 2015. But preparation, engineering and manufacturing for the massive vessel started years before that, around 2011, Hicks estimates. The facility is the only builder of nuclear-powered aircraft carriers for the U.S. Navy.

Hicks says there are about 5,000 shipyard employees working on the ship now, but that about 10,000 people have worked on the ship over the life of the project. The Kennedy represents about 55 million human working hours, according to Hicks.

For residents of the Hampton Roads region, of which Newport News is a part, this event is a huge deal, Hicks says. With a prominent military presence and the shipyard's giant footprint in the local economics, locals feel the gravity of the moment.

"It's a day where a person who has really been breaking his back for five years can bring his family and celebrate with Ambassador Kennedy, and she's here to recognize the work they were able to perform here," Hicks said, pausing to clear his throat. "That means a lot to a lot of people."

Second in class, first in tech

Mike Butler, program director for the $13 billion ship, has worked at Newport News Shipbuilding for almost 40 years. His father came to the area after World War II, and the family stayed.

He says at christening, the Kennedy will be 67% completed, ahead of where the USS Gerald R. Ford (CVN 78) was on its christening. The Kennedy is the second of the Ford-class carriers, which the Navy touts as being far more technologically adept than their Nimitz-class predecessors. Butler says the shipbuilders learned from some of the failings of the Ford. CVN 78 was over budget, behind schedule and suffered from problems with propulsion and weapons systems.

And that intergenerationality has helped longtime shipbuilders too, Butler says.

"You hand them a tablet, you hand them a 3D product model view of the ship, you hand them their work packages digitally, and they just run with it," Butler says of his younger colleagues. "It's interesting, they'll come back and tell us things we didn't even thinking using the digital tool for, and they've already figured it out, because they're just adept at that."

Butler says it will be bittersweet to see the ship go off for testing, but there is work to be done before then.

"Right now, as we're sitting here talking, there are 3,000 people in that ship right now welding, putting pipe in, that are oblivious to what it happening right now," Butler says. "They're getting their job done. They'll all be here tomorrow. They'll all have their families here to get to see what they do."

The USS John F. Kennedy will be home for Ensign Cheyenne Scarbrough, once it's commissioned in the summer of 2022. Scarbrough joined the Navy in 2002. She served three years on the USS Enterprise, then three and a half on the USS Harry S. Truman. Her longest post was five years on the USS Gerald Ford.

Now she's one of the 250 sailors to date who have checked on board as crew for the Kennedy.

"Everyone's super excited, super motivated to bring the ship to life, so I'm just super proud to be part of this," Scarbrough says.

This isn't the first time she's been part of an inaugural crew, as she served on Kennedy's predecessor, the Ford. But she couldn't make that christening ceremony. As one of the first crew members, she's a "plank owner" of the ship.

"It means that you were part of the initial manning of the crew," Scarbrough says. "You have a special place in the ship's life and history, being a plank owner."

Sr. Chief Dave Adkins works in logistics. Everything from carrier parts to toilet paper fall under his purview. He's committed to the ship through 2024, and while it's not yet in service, the work is well underway.

Adkins was a crew member on the original USS John F. Kennedy. He says his perspective has come full circle.

"Back then, I was a younger sailor," he says. "So I didn't appreciate the macro level of operations on board an aircraft carrier. Now that I'm more of a senior enlisted sailor, I get to see the big picture and see everything come together, so it's very rewarding."

He says it's important to take time for events like Saturday's, to look back on this moment in time for sailors and for shipbuilders.

"When we have days like christening, we can sit back and enjoy it," he says. "But come Monday morning, we're going to go to work and go right back to what we do as sailors." 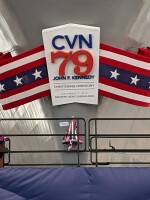