Jake Burton Carpenter, whose snowboard business and promotional efforts transformed the sport into a global sensation, died Wednesday at 65 from complications from cancer.

Carpenter, the founder of the iconic Burton Snowboards company, was born in 1954 — when snowboarding was radically different from what's seen today. During the mid-1900s, snowboards looked more like long sleds, with a light weight and nylon straps.

His attachment to snow stemmed from childhood ski trips with his family, which allowed him to escape school, where he said he was the "proverbial 'underachiever' and wise ass."

"My dad sort of figured it might be something fun for a family to do when I was around 7 or 8 and he would take the whole family," Carpenter told NPR's How I Built This. "I just always had this attachment to snow, to me it meant no school."

It’s with great sadness as we all mourn the loss of snowboard pioneer, Jake Burton Carpenter. Thank you for all that you’ve done for our athletes and for shaping the sport of snowboarding into what it is today. Your legacy will live on forever! #RideonJake pic.twitter.com/DRLQlymBTG

After graduating from college and jumping from job to job, Carpenter moved to Vermont in 1977 and started Burton Boards out of a barn where he was working. There, he started turning existing designs into the snowboards that have been used by global superstars such as Shaun White and Ayumu Hirano.

"He created bindings that attach you to the board so you can actually carve and control the board much better," Vermont ski shop worker Fischer Van Golden said.

Carpenter's initial goal was to use the company as a get-rich-quick scheme, but he later turned his attention to nurturing the sport.

"After a couple of years, it became much more important to me that I was right about the decision that there was a sport there," Carpenter told StoryCorps. "And I focused not about my own material needs or accomplishments or whatever; I just thought about the sport."

As time continued, Carpenter's influence on the snow sports world grew. In 1983, he persuaded the Stratton Mountain ski resort in Vermont to open its slopes to snowboarders. By 1984, Burton Snowboards had become a major brand, with sales reaching $1 million.

Hanging in my office is one of the early, wooden "Burton Boards" that are now so iconic to the sport. Marcelle and I will keep it there as a reminder of Jake's generosity to his employees and his community. #RideOnJake pic.twitter.com/yYFz0m95Nn

Carpenter never let his business ruin his passion for snowboarding. He visited the slopes 100 days a year and snowboarded on six different continents.

It was this passion that helped him start a relationship with his future wife, Donna Gaston, in 1982. Ironically enough, she said her first experience snowboarding was "awful." They married in 1983.

Together, they expanded Burton's presence in the U.S. and eventually entered the Europe and Japanese markets, selling a vast array of snow sports gear. For their efforts in pioneering snowboarding, the Carpenters were inducted into the U.S. Ski and Snowboard Hall of Fame in 2007.

"Snowboarding brought kids back to the slopes, giving them a sport and a culture they could relate to, and Jake & Donna were a driving force behind the sport for over 30 years," their Hall of Fame tribute said.

Carpenter is survived by his wife and three sons, George, Taylor and Timi Carpenter. Burton employees were informed of his passing on Thursday. In typical fashion, they were asked to honor their late founder by going snowboarding. 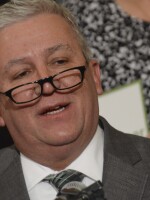