A Mother And Daughter On Homelessness, Humility And A $6-A-Week Grocery Budget

The day before Ashley Baker turned 16 years old, she moved into a Dallas motel with her mom. They were newly homeless.

Sandy, Ashley's mother, then 44, had just left a troubled marriage, scraped together what money she could and left home with Ashley.

For the next two and a half years, they were homeless. They recounted the challenges they faced during a recent StoryCorps interview in Dallas.

"One of the first places that we lived was [an] InTown Suites Hotel," said Sandy, now 54. "And there was nothing sweet about it. It was crazy bad."

When Ashley woke up in the motel the first morning after they moved, it was her birthday. Despite their circumstance, she said, she did all she could to "make the best of it."

In the years that followed, Sandy worked part-time at a deli, and later as a waitress for a small restaurant. For a while, Sandy's wages helped pay for the pair to live in the motel, and later to chip in for rent at a friend's house.

But eventually, they could no longer afford to pay it. For three weeks, they slept in a tent set up in a state park just outside the city.

The pair recalled how much they struggled pitching their tent that first night. The ground was "hard as concrete," Ashley said, which made it near-impossible to drive in the stakes.

Ashley said she offered to sleep in the car, but her mom refused.

"This was not going to be my moment that I failed," Sandy said. "I was going to provide shelter for you that night, and we were going to get it done."

"And the rest we would figure out — and we did," she said.

Ashley and Sandy lived on a biweekly grocery budget of $12.

"I remember seeing your spine," Sandy said to her daughter.

"And my ribs," Ashley said.

So, they would go to Sam's Club and Costco several times a week and pretend to shop. In reality, though, they were hunting for free food samples set out for customers. Ashley remembered that when she did this, she'd catch others giving her dirty looks.

"School was rough. My parents were divorced. I was homeless," Ashley said. "Everything just came crashing down. I wanted to die."

But later, Ashley's youth pastor connected her and her mom to an organization that houses families in converted Sunday schools. That organization, called Family Promise, provided them with a place to stay while Sandy worked and saved money, and while Ashley finished high school.

Fast forward to today, 10 years later, and Ashley and Sandy live together in McKinney, Texas, just outside of Dallas. This past year, Ashley, now 26, graduated college. And Sandy, 54, works on Family Promise's board, and helps provide housing for others in need.

Looking back, they said, the situation wasn't only challenging — it was humbling, too.

"When everything's taken away from you, what you're left with is ... what really matters," Sandy said.

"The people that love us the most," Ashley said.

StoryCorps is a national nonprofit that gives people the chance to interview friends and loved ones about their lives. These conversations are archived at the American Folklife Center at the Library of Congress, allowing participants to leave a legacy for future generations. Learn more, including how to interview someone in your life, at StoryCorps.org . 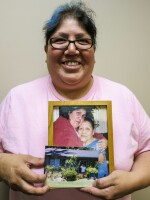 Avery Ellfeldt
Your support is vital to JPR's ability to cover regional issues, and bring you fact-based news.
Contribute Now