Elsie McGrath is an unlikely renegade.

For much of her life, the 81-year-old tried to avoid confrontation and follow the rules.

But that changed in 2007, when she became an ordained priest — and in doing so, broke one of the most fundamental rules in Roman Catholicism.

"This was definitely not part of the plan," McGrath said, of her ordination. "This was what the spirit within me was leading me to."

She was excommunicated along with fellow priest Rose Marie Hudson and Bishop Patricia Fresen, who ordained the two at a synagogue in St. Louis.

Only men are allowed to join the Roman Catholic clergy, but proponents of women's ordination are hopeful that may change. During a Vatican summit in October, Pope Francis said he would explore the possibility of female deacons, a class of ministry allowed to oversee weddings and baptisms but not consecrate the Communion wafer and wine.

A key part of the debate centers on whether women were ordained in the early days of the church.

In the New Testament, the Apostle Paul refers to Phoebe as a "deacon in the church" — but the Rev. David Meconi said there's no evidence she was actually ordained.

"The word deacon can mean simply servant, one who lays down his or her life for others in terms of whatever service is at hand," said Meconi, a professor of theology at Saint Louis University.

There are many roles open to women in the Catholic Church today, said Meconi, including campus chaplain and Eucharistic minister. (Eucharistic ministers serve Communion but do not consecrate the bread and wine themselves.) Still, he believes restricting ordination to men is an essential part of the faith.

"We do belong to a religion in which God himself chose to become a man, not a woman," Meconi said. "We believe that as God, he didn't participate in any kind of misogyny when he picked those Twelve Apostles. That's a divine free act."

Many women who describe themselves as Catholic are already working in ministry — without permission from the church. Currently more than 200 women are priests and deacons in the U.S., according to the Roman Catholic Women Priests association.

Despite her excommunication, McGrath continues to lead what she calls an "inclusive Roman Catholic congregation" in St. Louis.

The Archdiocese of St. Louis doesn't officially recognize the congregation, which meets once a week in a Unitarian Church.

"Our choice is to remain in the church and effect change from the bottom up, because that's the only way change ever happens anywhere," McGrath said.

Some Catholic women, like Marie Andrews, say they won't pursue ordination unless the Vatican officially changes the rules.

"My calling is to remain and to be steadfast and know that no changes ever happened without people pushing for them, even when things are not what we would like them to be," Andrews said.

She grew up Catholic, the only daughter in a family of six boys.

"The saying was always, 'Oh, with all these boys, surely one of them will be a priest,'" she said. "I am the only one who has consistently wanted to be a priest."

As an officially sanctioned Eucharistic minister, Andrews delivers Communion to homebound seniors in St. Louis. She carries a small wooden cross wrapped in a white handkerchief and a wafer of bread consecrated by a priest.

For Mary Bohley, 93, Andrews' visits are a blessing and a lifeline to the outside world. After praying together, Bohley hugs her and presses a chocolate bar into her hand.

"I can depend on her every single week," Bohley said. "She's my connection to the parish."

Andrews is hopeful that the Roman Catholic Church will eventually accept female clergy, whether deacon or priest. But when it comes to a timeline, her attitude is matter-of-fact.

"It reminds me of other things that took a long time in the church to change," she said. "The church used to support slavery and believe the Earth was the center of the universe," she said.

"I would like to see change faster, but I can be patient."

In the audio of this story, as in a previous Web version, we incorrectly say that deacons are not allowed to offer Communion. Deacons may not consecrate the Communion wafer and wine but they may offer Communion. 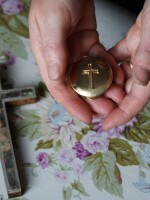 Shahla Farzan
Shahla Farzan is a general assignment reporter and weekend newscaster at St. Louis Public Radio. She comes most recently from KBBI Public Radio in Homer, Alaska, where she covered issues ranging from permafrost thaw to disputes over prayer in public meetings. A science nerd to the core, Shahla spent six years studying native bees, eventually earning her PhD in ecology from the University of California-Davis. She has also worked as an intern at Capital Public Radio in Sacramento and a podcaster for BirdNote. In her free time, she enjoys hiking, combing flea markets for tchotchkes, and curling up with a good book.
Your support is vital to JPR's ability to cover regional issues, and bring you fact-based news.
Contribute Now