A new museum in Washington, D.C., claims to provide a day-in-the-life look at the experiences of law enforcement officers, from local police to prison guards. But some people say it doesn't tell the whole story. Mikaela Lefrak from member station WAMU reports.

MIKAELA LEFRAK, BYLINE: A tour of the new National Law Enforcement Museum begins with a movie. In a voiceover during the first scene at a police graduation, you hear a quote by the Greek philosopher Plato.

UNIDENTIFIED PERSON #1: The greatest amount of power is given to those called the guardians.

LEFRAK: After the music swells, the rest of the movie focuses on police forces around the country working harmoniously with their communities.

UNIDENTIFIED PERSON #2: We all got to work together somehow.

UNIDENTIFIED PERSON #3: You need to prove yourself - that you're actually going be open, and you're also going to tell people the truth.

LEFRAK: Craig Floyd is the CEO of the National Law Enforcement Memorial Fund, the force behind the museum's development. He knows a lot of people don't trust police these days.

CRAIG FLOYD: There's been a disconnect in some communities around this country over the last few years. I think this museum experience are going to go a long way toward building those bridges.

LEFRAK: The $103 million museum was privately funded, mostly by corporations like Motorola and Glock. There are exhibits on different law enforcement career tracks and a video that follows a patrol officer throughout her day.

But if you're looking for the museum's take on current protests over, say, officer-involved shootings, you won't find it. Lead exhibit developer Rebecca Looney says it's an all-ages museum.

REBECCA LOONEY: And so when we talk about crime and murder and the more intense things, you're never confronted by something that you're not going to be able to handle.

LEFRAK: That soft approach is clear in the Ferguson exhibit. It's the museum's only direct mention of an officer-involved shooting. Most of the exhibit is about body cameras - how they became more popular after black 18-year-old Michael Brown was shot and killed by a white policeman in 2014.

RON HAMPTON: Policing is a necessary component in our society. It can be better. But in order for it to be better, you have to work with it. So why not have that in the museum?

LEFRAK: Hampton's the former head of the National Black Police Association. He urged the museum's planners to include stories of minority and women officers. He thought it would help the different communities connect.

HAMPTON: And I think every police officer ought to know something about the history of the institution they work in.

LEFRAK: Now, he says, he feels like the committee just didn't listen. David Brant, the museum's director, says he sees its role differently.

DAVID BRANT: We haven't propagandized history. We're giving you the reality of day in the life. History is what it is. We're not really commenting on the news.

LEFRAK: To him, bringing up movements like Black Lives Matter would just turn people away.

BRANT: As soon as certain people hear Black Lives Matter, they react one way or the other. It creates a difficult setting to have a fair and objective and productive conversation.

LEFRAK: So the museum's permanent exhibits don't mention it. Brant does say he's planned educational programming and discussions on subjects like Ferguson's impact on policing. He hopes both police officers and community advocates will show up. For NPR News in Washington, I'm Mikaela Lefrak. 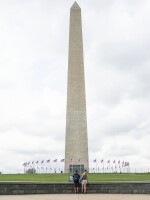 Mikaela Lefrak
Mikaela Lefrak is WAMU’s Arts and Culture reporter. Before moving into that role, she worked as WAMU’s news producer for Morning Edition.