Photos Of Villagers 'Dreaming' Of Food Sparks Outrage Across India

Staged photos of impoverished Indians posing with fake food have sparked fierce criticism from Indian photographers, global development experts and the CEO of one of the world's largest charities in India. They are calling the project unethical and insensitive.

Freelance photographer Alessio Mamo took the photos in the Indian states of Uttar Pradesh and Madhya Pradesh as part of a 2011 project called "Dreaming Food." On July 22, he posted five of them to the Instagram account of the Amsterdam-based , one the world's foremost photojournalism organizations. As a previous World Press Photo prize winner, Mamo was acting as a weeklong guest administrator of that account.

In the five photos, Indian villagers cover their eyes with their hands as they stand in front of an extravagant spread of food, including champagne flutes, bowls of shiny fruit, an entire roast chicken and what looks like a big plate of spaghetti Bolognese. It's all laid out on a bright red tablecloth.

"I brought with me a table and some fake food, and I told people to dream about some food that they would like to find on their table," Mamo writes in a caption for all five images.

The abundant food contrasts starkly with thatch houses, overgrown grass and an odd goat or cow tied up in the background.

Amitabh Behar, the CEO of Oxfam India, tells NPR that he believes Mamo's "intent was right, to shock people into making the right choice of not wasting food." But he said the photos were not "sensitive enough of the realities of poor people."

Oxfam, one of the world's largest charities, has operated in India for 67 years. Its India branch focuses on fighting poverty and injustice.

"[This photo essay] completely takes away the agency of the [subjects in the photos]," Behar says. "It's mocking their poverty."

He notes that NGOs like Oxfam have strict internal policies that prohibit employees from taking photos of children or subjects in vulnerable situations. Mamo should return and redo his project with greater sensitivity and "utmost respect for the poor and their life," Behar says.

The images and the controversy they sparked have been covered widely in Indian media this week, as well as globally. Critics on social media called them exploitative and inhuman.

Since so many of you are (rightly) mad about this @WorldPressPhoto project, here are some actual facts about hunger in India from your friendly malnutrition reporter. 1/n https://t.co/9E2jrjgcUF

So much humiliation across the world and World Press Photo still haven't removed the post or apologised? We might just boycott you here in India #worldpressphoto

Mamo's Instagram post got more than 20,000 likes as of Thursday — three times as many as is typical for images posted on the World Press Photo account — and more than 1,300 comments, most of them negative.

"The people I photographed ... freely participated in the project," Mamo wrote in a statement published on the blogging platform Medium, two days after his Instagram post. "The concept was to let Western people think, in a provocative way, about the waste of food."

In his caption, Mamo wrote: "Statistics show that 2.1 million children under 5 years old die of malnutrition annually. The idea of this project was born after reading the statistics of how much food is thrown away in the West, especially during Christmas time."

Mamo did not immediately reply to NPR's request for an interview.

World Press Photo tells NPR it has no plans to take down Mamo's images. But it did amend the caption to his five images, noting that the project "has been the subject of much online debate," and linking to Mamo's statement.

"We believe that controversies are generally not best handled by deleting images that have been challenged. We think they should be debated in a constructive way," wrote David Campbell, the group's director of communications, in an email.

This isn't the first time World Press Photo has come under fire. Last year, a Iranian photographer who had been awarded second place in a World Press Photo contest was later accused of staging photos, copying another photographer's ideas and violating consent of his subjects. A jury member last year criticized another prize-winning photo for allegedly glorifying terrorism.

For its 2016 competition, the group introduced a new code of ethics after several previous entrants were disqualified for manipulating images.

Much of the criticism of Mamo's photos amounts to this: If a photographer wants to make a visual commentary about wasting food in the West, why stage the photos in India?

"The country's poverty is not a prop to illustrate every Western problem to a Western audience — in this case, wastage of food," wrote , head of the national photo desk at India's Hindustan Times, in an email to NPR. "I wonder why this was not photographed in the European countryside that he might possibly be better versed with?"

Another Indian photojournalist, Hari Adivarekar, raised concern over whether Mamo had truly obtained consent from his subjects. Someone in rural India might not completely understand what it means to have his or her photograph taken, he notes.

"In a country like India, consent is different than in the West," says Adivarekar, who splits his time between Mumbai and Bengaluru. "It's the responsibility of the photographer to help [his or her subjects] understand how far [the photo] will go and help them make an informed consent." 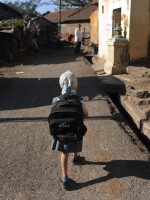