Central Americans who are running away from violence in their home countries now run into a dragnet of migration enforcement long before the United States border. They're getting caught in Mexico and being deported in record numbers, more than a quarter million in the last two years. As James Fredrick reports from Mexico City, Central Americans are scrambling to make sure they are not sent back to their violent homes.

JAMES FREDRICK, BYLINE: Twenty-year-old Brayan rarely stops joking with his fellow migrants even though he's only known them for a few days. He's finally relaxing in this quiet Mexico City neighborhood, a far cry from his home in the Honduran capital where recruitment into a brutal street gang was a constant pressure.

FREDRICK: He says there are jobs. They're just all illegal - selling drugs and all that. Brayan asked NPR not to use his full name, still fearing being targeted by gangs, and said fleeing was his only option for survival. But just getting through Mexico, he's been scammed, extorted and held at machete point by thugs. Mexico's migration agents haven't been much friendlier.

FREDRICK: He says they're all a bunch of pit bulls. They've already nabbed and deported him to Honduras twice. He says they never asked if he'd be safe back there. But he may not have to dodge migration anymore. He's actually in a cab on his way to their offices to file paperwork for a humanitarian visa, a document that allows him to be in Mexico legally.

FREDRICK: He says, "it's something that identifies me. It means I don't have to be afraid in Mexico. They can't send me home."

Right now home is this migrant shelter in Mexico City, one of the few in the country and the only one specifically for young migrants seeking protection. The goal is to get them humanitarian support, whether it's this one-year visa or long-term asylum in Mexico.

Mario Monroy, one of the shelter's coordinators, says it's hypocritical to hear Mexicans complain about the U.S. wanting a border wall given how Mexico is treating Central Americans.

MARIO MONROY: (Through interpreter) Our institutions have already built a metaphorical wall. The Americans say it's going to be the world's biggest wall, but it's already here. It's not on the U.S. border. Mexico is the wall.

FREDRICK: In the last year alone, Mexico deported more than 150,000 Central Americans. Mexican authorities did not respond to NPR's request for an interview. But the U.N. High Commission on Refugees estimates that up to half of the Central Americans migrating through Mexico may be fleeing violence.

The commission's head of protection in Mexico, Jose Sieber, says the country is still adjusting to this new reality and adds that migrants themselves don't know their own rights.

JOSE SIEBER: They reach Mexico unaware of the fact that they can raise their hand and claim for protection in Mexico.

FREDRICK: Even the migrants who know their rights are still wary of Mexican authorities. Seventeen-year-old Edgar, who's also at the shelter, didn't want to give his full name fearing reprisal from authorities. He's hanging out at the shelter where fellow migrants play music. His hair was once styled but now flops around and curls after months of migrating. He says gang violence made his Guatemala City neighborhood unlivable.

FREDRICK: He says, "every hour or two, we'd hear gunshots and then the ambulance coming." He's amazed he made it all the way up to Mexico City.

FREDRICK: "You either die on the journey, or you get across the U.S. border," he says. But if he can get this visa, some sort of protection from the Mexican government, he may not have to think in life and death terms anymore. For NPR News, I'm James Fredrick in Mexico City. Transcript provided by NPR, Copyright NPR. 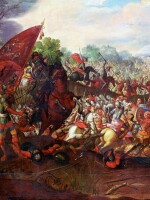 James Fredrick
Your support is vital to JPR's ability to cover regional issues, and bring you fact-based news.
Contribute Now