New Hampshire's attorney general suspects five drug companies broke the law when they marketed prescription opioids painkillers like OxyContin. The AG's investigation could be followed by a lawsuit. He says the drug companies aren't cooperating with the state. It's the latest in a series of legal actions that aim to hold the pharmaceutical industry accountable for a nationwide spike in opioid abuse. New Hampshire Public Radio's Jack Rodolico reports.

JACK RODOLICO, BYLINE: It is no secret drugs like OxyContin and hydromorphone are highly addictive. The real question is this - do drug companies downplay how addictive they are while marketing the medicine to doctors? New Hampshire's attorney general, Joe Foster, suspects false marketing of legal pills has led to abuse of illicit drugs like heroin. That's why he subpoenaed the nation's largest manufacturers of prescription painkillers.

JOE FOSTER: If they are continuing to mislead the public, we're going to continue to improperly create addicts in our state. Four out of 5 folks who turned to heroin were addicted to prescription opiates first.

RODOLICO: The AG demanded upwards of a million pages of marketing records from five companies - Actavis, Endo, Janssen, Teva and Purdue Pharma. James Boffetti is the state's lead attorney on this investigation. And earlier this summer, he told a Superior Court judge that it had been a year since the state subpoenaed the drug companies.

JAMES BOFFETTI: I've yet to receive one piece of paper from any of these drug companies. And you've got to ask yourself, why? Why are they fighting so hard?

RODOLICO: They're not only fighting hard in New Hampshire. The city of Chicago, the state of Mississippi and two counties in California have all filed lawsuits against some of the same companies New Hampshire is investigating. In 2014, more than 28,000 Americans died of opioid overdoses. New Hampshire has been hit harder than most states.

MICHAEL CONNOLLY: And, your honor, it is also inconceivable...

RODOLICO: Attorneys for the drug companies declined to comment for this story, but here's the defense attorney Michael Connolly laid out in court in New Hampshire - for a number of different, kind of opaque legal reasons, he says the state is trying to reach beyond its authority and that overreach could unduly harm his clients.

CONNOLLY: That harm can include collateral consequences from regulatory agencies as well as public relations harms.

RODOLICO: In short, he's saying the drug companies have done nothing wrong and they'll be harmed if forced to reveal their internal marketing strategies. At this court hearing, the drug companies were represented by 13 lawyers in crisp suits. And they've got even more in the wings, all employed by the state's top law firms. One of their lawyers is even a former attorney general. James Boffetti says those lawyers are poring over state law to find any way possible to stall the case.

BOFFETTI: We're in a mess. You know, we have a country that's addicted to opioids that move to heroin. So we need to solve this problem, and part of it is we need to figure out what the drug companies did, if anything, to create this problem.

RODOLICO: Georgetown law professor Gregg Bloche says all these cases against opioid makers, they're an unprecedented attempt to take on the industry for the way it markets medicine. And he says even if drug companies win every one of these cases, they could still lose.

GREGG BLOCHE: They may well prevail for the most part in the courtroom, but they could lose in the court of public opinion because of the visibility of their practices. They're fighting discovery - understandably - because they don't want these practices exposed.

RODOLICO: That is, exposed to the people that matter most to their bottom line - patients, doctors and investors. For NPR News, I'm Jack Rodolico in Concord, N.H. Transcript provided by NPR, Copyright NPR. 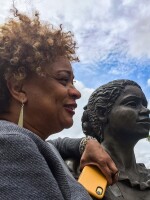 Jack Rodolico
Before joining NHPR in August 2014, Jack was a freelance writer and radio reporter. His work aired on NPR, BBC, Marketplace and 99% Invisible, and he wrote for the Christian Science Monitor and Northern Woodlands.
Your support is vital to JPR's ability to cover regional issues, and bring you fact-based news.
Contribute Now