#NPRreads: What Our Interns Are Reading This Week

#NPRreads is a weekly feature on Twitter and The Two-Way. The premise is simple: Correspondents, editors and producers from our newsroom share the pieces that have kept them reading, using the #NPRreads hashtag. Each weekend, we highlight some of the best stories.

"He was a New York story because he didn't have a lot and yet he gave a lot."

So begins the second paragraph of this wonderful story from N.R. Kleinfield in The New York Times. He weaves the tale of Bernhardt Wichmann III, a man who couldn't speak but whose kindness and jovial attitude spoke to so many in his Manhattan neighborhood. I found myself entranced by the arc of this story, eager to learn more while expecting the inevitable turn that the title gives away. Along the way, small anecdotes pepper the narrative – the Metropolitan Opera, late-night English lessons – with the kind of humanity we too often forget exists. There's a twist you won't expect and a crushing final line that wraps up a story that does what few can do: it will leave you smiling through tears.

There's good, healthy cuisine in Pittsburgh, I swear – we just also have food with greasy French fries where they normally shouldn't belong. (Get you a city that can do both.)

So I was surprised to see Eater's lengthy tribute to the underappreciated Pittsburgh Salad, which requires "a layered bowl of cool lettuce, some veggies, grilled chicken (or steak), and a sprinkling of shredded cheese, all served with French fries."

Maybe it contradicts the very idea of salad, or maybe it improves it. The salad is like the famous Primanti Bros. sandwich — with fries and coleslaw stuffed inside — but with a sense of refinement, Shannon Reed writes.

Now, I'm no fan of either dish myself (although I will always rep for Pamela's Diner, which Reed says makes the best version). But this piece also serves as a loving tribute to the city that, until the last few years, has also gone underappreciated:

"The Pittsburgh salad is the perfect Pittsburghian compromise: mostly sensible, but a little indulgent; modern, but of the past; the stuff of lunch hours and last-minute dinners, but also worth looking forward to after a long morning of desk-sitting, or as a small-scale reward on a Friday night out with friends."

When reporter Rukmini Callimachi writes a story, you brace yourself. She delivers her unforgettable coverage of terrorism for The New York Timeswith searing acumen, achieving a nuance and detail that gives her work a place on newsies' essential reading lists. In a new interview with Wired's Caitlin Roper, Callimachi gives us a tell-all — well, probably as much as she's allowed to tell — about the secret social media chat rooms on Telegram, an encrypted messaging service, through which she finds her sources.

As part of her work, she keeps a vigilant watch on notifications that might indicate larger stories, and keeps in touch with fringe users who can share with her the addresses of private ISIS channels. Offline, meanwhile, she travels to areas at the margins of jihadist sites to speak with escapees and does her best to visit jihadi and ISIS strongholds after they've been liberated. Most arresting of all, if not entirely unexpected, is that nothing seems to scare Callimachi off. "I've come to the point where I metabolize it pretty quickly," she says. "I love what I do, and I think my body understands at some level that I have to put some distance between myself and my work."

Is your Facebook feed hurting our democracy? Maybe. The Wall Street Journal published a frightening interactive that lets you compare a "red feed" and a "blue feed." That is, one feed has "very conservatively aligned" articles, the other "very liberal" ones. You can choose a topic – e.g. Hillary Clinton, ISIS, guns – and it will present two parallel yet disparate sets of stories. "Scholars worry that the social network can create 'echo chambers,' where users see posts only from like-minded friends and media sources," the article reads. 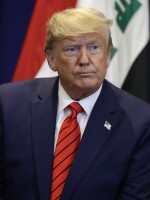 Brandon Carter
Brandon Carter is an assistant producer on NPR's Washington Desk. He manages the NPR Politics social media accounts, writes and produces stories for the web and writes for the NPR Politics weekly newsletter.
Your support is vital to JPR's ability to cover regional issues, and bring you fact-based news.
Contribute Now